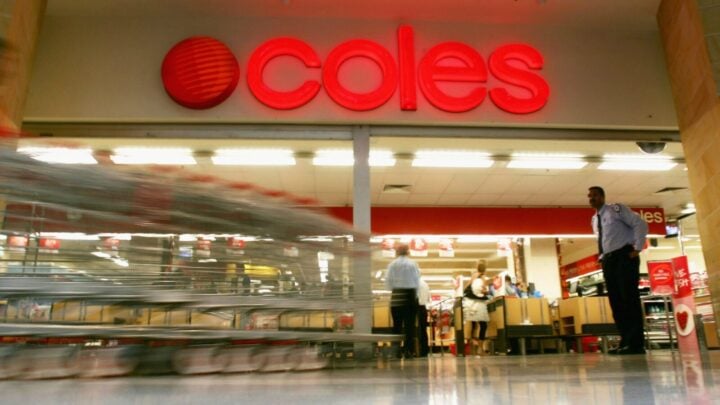 Coles was one of the big-name retailers named and shamed at this year's 2020 Shonkys Awards. Source: Getty.

Consumer advocacy group Choice has released the names of this year’s 2020 Shonky Award winners and it’s bad news for some of Australia’s most recognised brands. Harvey Norman, Coles and Bunnings are among the big-name retailers named and shamed at this year’s Shonkys, the awards ceremony for the worst products flogged to Aussie consumers.

“In the sixtieth year of Choice, it’s fitting that the 2020 Shonkys uncover and call out practices from companies taking advantage of their customers,” Choice CEO Alan Kirkland said. “Whether it’s complex financial products designed to trap people in debt or home appliances that fail in our lab testing, the Choice Shonkys are here to help you avoid buying a dud.”

This year, floor cleaning products sold at Coles and Bunnings have been awarded a Shonky, after Choice testing revealed they actually performed worse than water and “won’t do much more than make your floor smell nice”.

“Choice puts products to the test in our labs every day and these test results are one of the reasons we have to,” Kirkland said. “Floor cleaners barely work. In our lab tests some brands sold at retailers like Coles and Bunnings performed worse than water.

“In fact, our experts say floor cleaners are basically ‘floor perfume’. This is why Choice’s independent testing is so important — without someone checking, you could be buying products that barely work.”

GreenTech air purifiers are another one to make the list, after this brand came dead last in Choice’s testing, performing “abysmally” according to the consumer advocacy group.

“With the bushfires last summer and Covid-19 not long after, air purifiers have been heavily marketed to Australians as a solution to bushfire smoke and airborne viruses,” Kirkland said. “Not so for Greentech air purifiers, which performed abysmally, coming dead last in our testing. In fact, our labs could barely find any difference in the quality of air when they tested the Greentech purifier.”

Meanwhile, bed supplier Revitalife also earned a Shonky after a Choice investigation found the company was targeting older Australians with a health survey that was used as a tool to sell expensive beds.

“The sales tactics employed by Revitalife were brought to our attention by members of the Choice community and our colleagues in the community legal sector,” Kirkland said.

“Revitalife uses a ‘health survey’ to target people with health worries. This company promises to help customers with their health needs but then sells them expensive beds with dubious health claims. Revitalife makes huge claims about the benefits of their beds based on a single clinical trial of six people. This just isn’t good enough. Revitalife is targeting older Australians through a shonky sales scheme and selling sleep remedies that aren’t supported by credible evidence

Harvey Norman was also awarded a Shonky for its “toxic partnership with Latitude Finance”. According to Choice, the retailer was trying to push a high-cost credit card onto their customers.

“Harvey Norman has partnered with Latitude Finance to push a credit card with an eye-watering interest rate of 22.74 per cent,” Kirkland said. “With Latitude, Harvey Norman is selling one of the most expensive credit cards on the market and it needs to end now.”

And InvoCare Funerals, Australia’s largest funeral provider which has brands including White Lady and Simplicity, rounded out the awards earning a Shonky for failing to be upfront about pricing.

“InvoCare has done everything it can to avoid being upfront with grieving families about costs,” Kirkland said. “When the NSW government introduced laws requiring funeral companies to disclose their prices, InvoCare should have done the right thing and made prices available to all Australians.”

He continued: “Instead, it has cynically left the rest of the country in the dark. InvoCare provides prices for NSW and ACT funerals on its website but doesn’t provide grieving people in other states with the same information.”

Have you used any of these products before?