Screen Critic: Shocking documentaries, an over the top action comedy, your new comfort show and more 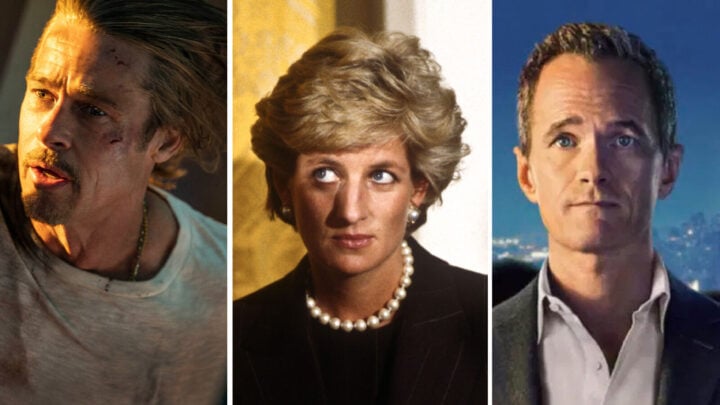 Looking suitably frantic and confused, Brad Pitt spends most of his time running, jumping, ducking and punching in the Bullet Train, a fun, frenetically directed action-comedy that features a plot so incomprehensible even the characters don’t seem to know what’s going on.

As the train zips towards Kyoto its passengers mysteriously vanish as a growing number of professional killers climb aboard and engage in much shouting, shooting, smacking and stabbing, all while having to worry about a killer snake that has gotten loose from the luggage.

Moving as fast as the train itself is the dialogue, which is often indecipherable and spouted either in monotonal mumbles or intense bouts of yelling, sometimes both. The performances here are not exactly Oscar bait.

Still, Bullet Train is an enjoyably hectic, high-volume romp that will reward those who see it for the loopy lark it is. Those silly enough to try and make sense of it will probably end up with a headache.

The eternal appeal of the Princess Diana story is on show again in the respectful documentary The Princess, an engrossing chronicle of her public life and tragic death assembled purely through archival footage and photographs.

In one of the best profiles yet of Diana (how many have there been so far? 10,000?) the film features no contemporary interviews or formal narration as it details Diana’s romance and doomed marriage to Prince Charles, her personal difficulties and the deep resentment she roused inside the royal family as her swelling popularity began taking on a life of its own.

Skillfully edited, the film mostly sides with her, editorializing her treatment by the media, alienation and untimely death. Wisely, though, it includes the touchy suggestion that, adored as she was, Diana was an overrated public figure. (Opens 11 August)

Her crusade to get hacked images of her daughter off the site sparked massive controversy, legal action and an FBI investigation that ultimately saw the Is Anyone Up? site shut down in 2012 and Moore jailed.

There are some confronting images early on – Moore was a purveyor of pornography and filth, encouraging fans to video themselves doing disgusting things – and as the account unfolds we see how the power of a loyal online following can erase any sense of conscience.

Featuring some stellar examples of human stupidity, the harrowing exposé is the latest cautionary tale about the downside of life online and serves as an ever-timely warning to keep any photos of yourself, to yourself.

While it’s not exactly a slog, there’s a lot of waffle strewn across the passable eight-episode sci-fi Prime series Paper Girls, an overlong, slowly paced time travel jaunt that sees four teenage girls transported from 1988 to 2019.

For all its pulpy sci-fi trappings – firefights; giant robots; time warps – the yarn is at its most interesting when the girls encounter older versions of themselves and grapple with how their futures have turned out.

As a time filler, Paper Girls is mildly engaging but far from compelling.

All of the heartbreak, self-doubts and defiant attempts to “get back out there” following the collapse of a long-term relationship, are perfectly embodied by Neil Patrick Harris in the warm, funny, bitter-sweet adult comedy series Uncoupled on Netflix.

In one of his best performances to date, Harris plays Michael Lawson, a successful upper-class real estate agent whose secure and happy New York lifestyle is upended when Colin (Tuc Watkins) walks out after 17 years of living and loving together.

Created by Darren Star (Sex and the City) and Jeffrey Richman (Modern Family), Harris does a fabulous job teasing out those conflicting responses to a break-up that can drive you batty.

While Michael tries diving back into a dating scene populated by Millennials who consider condoms old-fashioned, he remains preoccupied with why his precious relationship went bust.

While the sumptuous upper-class setting of Uncoupled might seem a tad rarefied – everyone is attractive, rich and has a killer view of the NY skyline – its themes are easy to relate to, especially when dealing with the thorny issues of friendship, commitment and loyalty. It’s a terrific, highly polished show.