‘The loss is great’: PM breaks down announcing withdrawal from Afghanistan 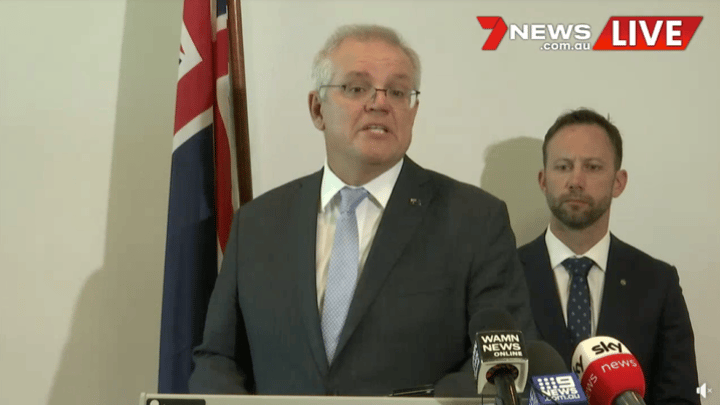 Scott Morrison became emotional as he spoke about the Australians who have died during the 20-year conflict. Source: Facebook/7News

Prime Minister Scott Morrison has made the historic announcement that Australian troops will be withdrawn from Afghanistan, choking back tears as he read the names of the 41 soldiers who have died in the conflict.

The news comes as United States President Joe Biden announced an end to the 20-year war, which has cost the lives of 2,448 American service members and an estimated US $2 trillion (AU $2.5 trillion).

At the press conference in Perth on Thursday afternoon, the PM said more than 39,000 Australians have served in Afghanistan since the war began, and announced that the remaining 80 Australian troops would be coming home by September.

Morrison became emotional following the announcement, as he read the names of the 41 Australian soldiers who had been killed in the conflict. In the tearful address, he thanked the soldiers for their service and said today would be dedicated to their memories.

“The loss is great. The sacrifice immense. The bravery and courage [are] things we can speak of but not know of personally,” he said. “These brave Australians are among our greatest ever, who have served in the name of freedom. This day we dedicate to their memories. We think of their families, their friends, the life they would have lived. But they gave that for others they did not know.

“We can be so proud of them, of their service, we’re so proud of the men and women who serve in our Australian Defence Forces — so many of them also represented here in Western Australia. We thank them for their service humbly and gratefully. The memories of all Australian Defence Force members who have lost their lives continue to be honoured for their sacrifice and contribution to Australia’s mission in Afghanistan.”

Morrison acknowledged it was “an emotional day” and extended thanks to all the Australians who had served and acknowledged the impact it had had on their lives.

“Freedom is always worth it,” he said. “The decision represents a significant milestone in Australia’s military history. Over the past 20 years, Australia has been a steadfast contributor to the fight against terrorism in Afghanistan. Australia has fought alongside coalition and Afghan partners to degrade the capabilities of terrorist organisations, including al-Qaeda.”

Despite the end of the war, Morrison said the future for Afghanistan was still “complex” and Australia was dedicated to standing with them as they work towards peace in the country.

“Once again, we stand with them and the complex task of making peace that lies ahead for those people,” he said. “Australia continues to support the negotiations between the Afghan government and the Taliban. We encourage both parties to commit to the peace process that so many Australians have died to provide for.”

What do you think about this announcement? Do you think 20 years was too long?