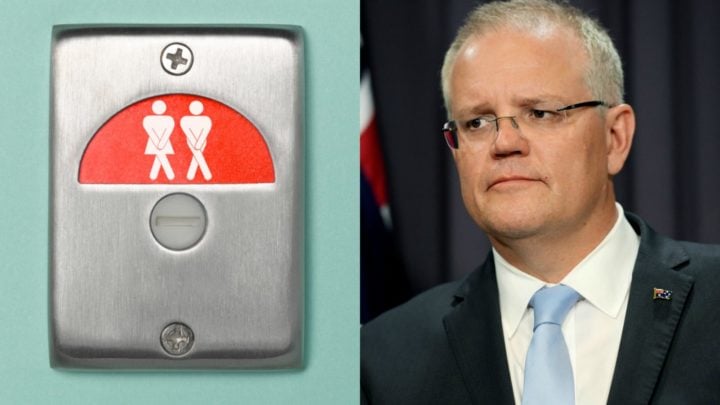 Scott Morrison has slammed gender-neutral bathroom signs on display in his department, describing it as “political correctness”, “not necessary” and “over the top”.  The Prime Minister made the comments following a tweet made by Channel 9’s political editor, Chris Uhlmann, on Thursday, which shows the sign outside the women’s toilets at the Department of Prime Minister and Cabinet (PM&C) in Canberra.

Meanwhile at the Barton offices of Prime Minister and Cabinet… pic.twitter.com/oVL9f0xrXe

But when asked about the sign later on Thursday, Mr Morrison said: “I’ve been made aware of this. It’s ridiculous. It’ll be sorted out.

“It’s over the top,” he told 2GB radio host Ben Fordham. “You don’t need to do this stuff. It’s just political correctness and over the top. I don’t think is necessary. I think people can work out which room to use.”

Asked whether the signs would be removed, Morrison said: “That’s what I expect.”

Social media users have since weighed in on the controversial topic, with many agreeing with the prime minister’s comments. “Good on you Scomo!” one commentator wrote. Another added: “Don’t usually agree with scomo, but I have to here.”

While a third wrote: “This issue is the major problem we face at the moment. Thank heavens it’s been brought to light.” And another added: “Thank christ we have someone at the top with common sense.”

However, Morrison’s comments have also been met with some criticism, with one commentator writing: “People get upset about signs like this yet unisex toilets have been normal for as long as I can remember. I don’t get what the drama is?”

Meanwhile, opposition leader Anthony Albanese also chimed in, adding: “The PM doesn’t have a plan to deal with cost of living going up, living standards going down and wages going nowhere – but he has a plan to deal with this bathroom sign in an office building.”

It’s not the first time the topic of gender-fluidity has caused debate. Last year, Etihad Stadium in Melbourne caused a massive debate on social media after it unveiled new signs on the toilets at a recent football match.

During an annual Pride Game between Sydney and St Kilda in June last year, footy-goers were met with signs and flashy promotions on the screens throughout the arena advising people they were free to use whichever bathroom they identified with at three of the toilet blocks across the venue. The stadium signs read: “Gender diversity is welcome here. Please use the restroom that best fits your gender identity or expression”.

The toilets at Etihad, which had only been introduced for the Pride Game, had caused debate online. There were people who praised the stadium and the AFL for introducing the toilets in the first place.

One person said the toilets should last longer than one game. “Why isn’t this permanent then? Having this sign up once a year means nothing. Actively show your inclusion all year round,” he said.

Then there were those who thought it caused bigger problems. One Twitter user wrote: “Sorry but I don’t care what someone identifies as. If a bloke says he identifies as a woman & follows my daughter into the toilets cause of this sign, I’ll follow him & drop him. A woman is a woman & a man is a man. If I identify as a hamburger that doesn’t make me one does it [sic]”

The move by the stadium follows previous calls for similar bathrooms to be rolled out across all public and commercial buildings in Australia. In fact, a proposal was submitted to the National Building Codes Board in 2017 over the matter. Many believe the bathrooms will transgender people “choice” and “dignity” when it comes to something as simple as going to the toilet in public.

What are your thoughts on this? Do you agree with Scott Morrison?