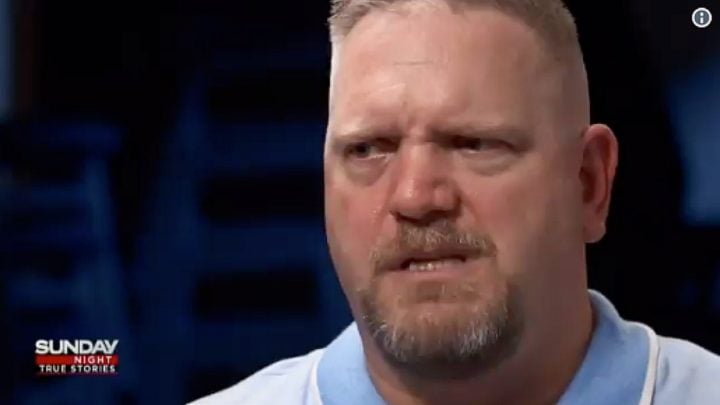 Dad Russell Harrison was almost charged with murder for the death of a robber who attacked his neighbour. Source: Twitter/ Sunday Night

A hero dad who rushed to help save his neighbour from a violent home invasion has revealed how he narrowly avoided jail time, after the robber died in the frightening altercation.

Russell Harrison was hailed a hero after running to rescue a woman, whose “blood curdling” screams could be heard ringing down the street as she tried to desperately fight off ex-prisoner Adam Slomczewski.

The woman had reportedly returned home in December 2015 to find him ransacking her house and was soon attacked by Slomczewski, who began to choke her and cut off her air supply. As a former US military non-commissioned officer, Russell has now recalled on Channel 7’s Sunday Night how he launched into action, wrestling the robber to the ground and saving the woman’s life.

Speaking about the shocking incident, the father-of-three said he knew someone was in need of desperate help at the time.

“We heard screaming,” he told reporter Steve Pennells. “They weren’t ‘Ahh, I’m hurt’. They were blood-curdling screams. It was a true scream that somebody was in trouble.

TONIGHT: how far would you go to protect your family? We meet the man who faced a murder charge for saving his neighbour's life from a break and enter. Plus – @FleetwoodMac almost broke up for good. We speak to the band about their new frontman, @NeilFinn at 8:30pm on @Channel7. pic.twitter.com/OuTyTxazcc

“It took Jess a minute to realise that it was me. As soon as she did she screamed, ‘Russell, help!’ So I threw the door open, I said, ‘What are you doing?’ He let go and took off running through the house.”

Russell said he then wrestled Slomczewski to the ground, keeping him in a headlock until police arrived. But by then the robber was unresponsive and while Russell tried to do CPR to bring him back to life, he could not be revived.

While he has since been praised for his quick thinking, his actions almost landed him behind bars.

For the past two years the father-of-three has been fighting to clear his name in relation to Slomczewski’s death, with the terrible ordeal putting significant strain on his life and marriage.

In the end the brave dad was not charged with murder, with the coroner ruling Slomczewski died of a heart attack from drugs in his system and the struggle with Russell.

Now Russell, who is from the US, has claimed more needs to be done to better protect homeowners who are defending their home.

“In the states, if you are defending yourself against a home intruder and they end up dead, so sorry, that’s your right to defend yourself,” he told Sunday Night. “You need to be able to defend yourself, defend someone else and defend your property without the fear of prosecution from the police.”

Sadly Russell isn’t the only Australian resident to find himself in the midst of a legal battle after an altercation with an intruder. Earlier this year weightlifter Brad Soper died after breaking into the home of Johan Schwartz in Sydney.

Johan was awoken to his dog barking and found the intruder inside his house. His wife and baby were also inside the family home. The two became involved in a physical confrontation as Johan tried to defend his home and protect his family.

Johan was later released without charge by police but the incident has caused a great amount of stress for the father who underwent counselling following the ordeal, The Daily Telegraph reports.

“As anyone can imagine, someone has died in his home, he is coping but struggling to come to terms with what happened,” Detective Chief Inspector Shane Woolbank said according to the publication.

Do you think there needs to be a change in the laws regarding home owners defending their property?