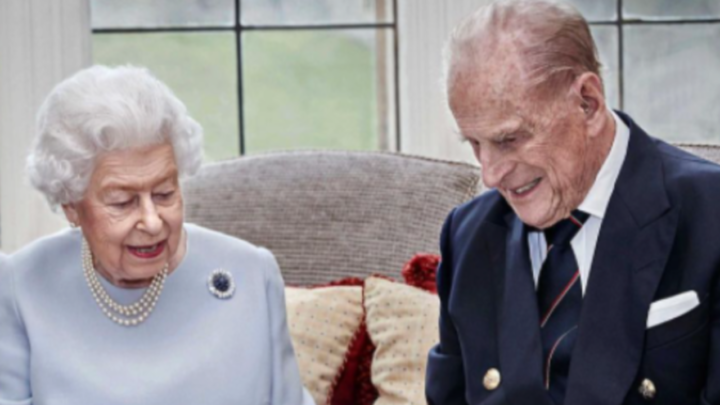 The royal family has released a new picture of the Queen and the Duke of Edinburgh in honour of their 73rd wedding anniversary. Her Majesty and His Royal Highness tied the knot on November 20, 1947 at Westminster Abbey.

The photo, taken by Getty Images’ royal photographer Chris Jackson, shows the monarch, 94, and Prince Philip, 99, siting on a sofa in the Oak Room at Windsor Castle, where they are spending the UK’s second lockdown, looking at ease as they read a card made by their great-grandchildren, Prince George, seven, Princess Charlotte, five, and Prince Louis, two.

The Queen opted for a pale blue dress for the photo, while Philip looked smart in a pair of grey trousers and a navy-blue blazer with gold buttons. The Queen also chose to wear a chrysanthemum brooch, which is made up of beautiful sapphires and diamonds. According to The Guardian, she wore the same brooch in images taken on their honeymoon at Broadlands in Hampshire, and again in images taken to mark her and Philip’s 60th wedding anniversary in 2007.

“This new image has been released to mark the 73rd wedding anniversary of The Queen and The Duke of Edinburgh tomorrow,” the Royal Family (the official Instagram account for the British monarchy) captioned the post.

“In the photograph Her Majesty and His Royal Highness are seen looking at an anniversary card made by Prince George, Princess Charlotte and Prince Louis, alongside other cards and letters sent by well-wishers.”

Royal fans were quick to comment on the lovely image and wish the royal couple a happy anniversary. “It’s a lovely picture of them both,” one wrote.

While the Queen and Philip usually don’t show public display of affection, the monarch has previously stated that Philip has been instrumental in her role throughout the years, telling the crowd in a speech for their 50th wedding anniversary that he had been her “strength and stay for all these years”.

“He is someone who doesn’t take easily to compliments, but he has, quite simply, been my strength and stay all this years,” she said at the time.

How do you celebrate your wedding anniversary?