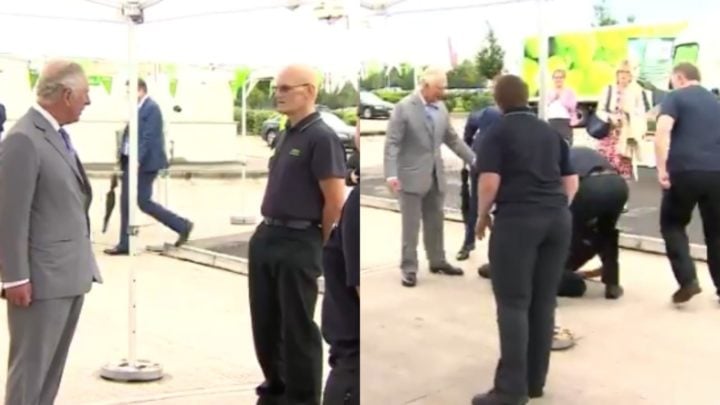 Prince Charles can be seen talking to the man before he dramatically faints. Source: The Royal Family Channel/Twitter.

The shocking moment a supermarket worker fainted mid-conversation while chatting to the Prince of Wales has been caught on camera.

In the footage, which has since been shared on social media, Prince Charles can be seen talking to the man outside of a UK distribution centre when the supermarket worker starts to sway and appears unsteady on his feet, before dramatically collapsing to the ground.

Prince Charles reached out as the man fell, while a number of concerned bystanders quickly ran to the man’s aid. The shocked royal can be heard saying in the clip “dear, oh dear” and “goodness”. Thankfully the man recovered quickly and continued his conversation with the royal after receiving medical attention.

Prince Charles and Camilla were visiting the Asda Distribution centre in Bristol, England to thank workers for their efforts during the coronavirus pandemic. “The Prince and The Duchess today thanked staff at @asda for all they have done to keep the country’s vital food supplies moving throughout the Coronavirus pandemic,” Clarence House said in a statement on Instagram.

“Their Royal Highnesses heard about the supermarket’s work with charities @fareshareuk and the @trusselltrust, who fight hunger and food poverty. Asda’s funding has allowed FareShare to support over 336,000 people and the Trussell Trust to set up e-referral systems for 230 of their food banks.”

The Prince and The Duchess today thanked staff at @asda for all they have done to keep the country’s vital food supplies moving throughout the Coronavirus pandemic.🥫🍞🍏 . Since lockdown began in March, the Asda Bristol Distribution Centre has made over 12,500 deliveries to stores across South West England with the 700 depot staff members working tirelessly to cope with the increased demand. This has meant changing shift patterns, postponing holidays, and making overnight deliveries to ensure extra food supplies reach stores for the following day. Their Royal Highnesses heard about the supermarket’s work with charities @fareshareuk and the @trusselltrust, who fight hunger and food poverty. Asda’s funding has allowed FareShare to support over 336,000 people and the Trussell Trust to set up e-referral systems for 230 of their food banks. As President of @businessinthecommunity, The Prince also heard about how Asda stores have been lending support for the charity’s National Business Response Network in recent months. Find out about the scheme through the link in our bio. . 📷 PA / Asda

Later in the day, Charles and Camilla also visited the Turnbull and Assert shirt factory in Gloucester to meet staff members, who during the early stages the pandemic, switched their entire production line to making scrubs for the NHS. Camilla dressed for the occasion in a white flared skirt and blouse, which she coordinated with a matching scarf and a sensible pair of tan heels. While Prince Charles looked dapper in a light grey suit matched with a blue shirt and dotted tie.

This afternoon in Gloucester, Their Royal Highnesses visited the @turnbull_asser shirt factory who, during the early stages of the pandemic, switched their entire production line to making scrubs for the @nhsenglandldn. 👕🏥 🧵 Having initially closed all their stores and workrooms, a dedicated team of skilled workers, equipped with PPE, returned to work at new machines – brought in especially for the production of NHS scrubs – and reconfigured to accommodate responsible social distancing. Aware that their own production capacity would only go some way towards the PPE deficit, the company decided to open-source their knowledge and learnings by sharing their production know-how and supplier contacts, in the hope that it would inspire and enable others to contribute to the cause. As the pandemic advanced, the company were keen to continue supporting key workers beyond their work shift by donating all profits between 30th April and 7th May to @nhscharitiestogether. 🌈 . 📷 PA

It comes just a few days after Camilla stepped out for a solo royal engagement, having recently returned to work following the Covid-19 lockdown. The 72-year-old spent the day in the English town of Swindon yesterday as she met with groups of essential workers who have been on the frontline throughout the ongoing pandemic.

The duchess wore a smart navy blue frock for the outing, which featured a bold geometric print and a contrasting white collar. Camilla paired the dress with a pair of her trusty beige court shoes and carried a cream scarf with her, no doubt to protect against the unpredictable British weather.