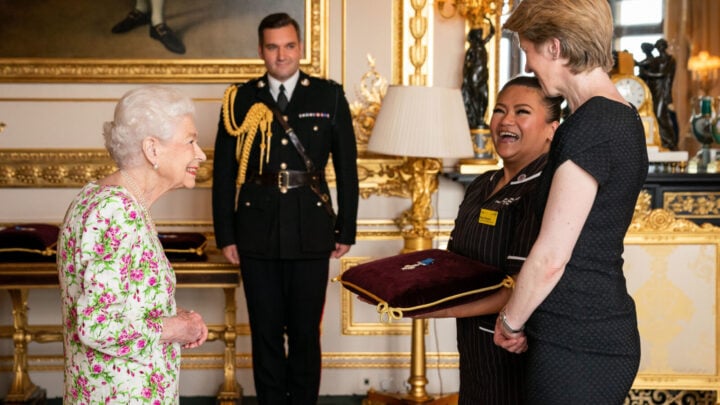 The Queen met with NHS leaders to award them the George Cross. Source: Getty

Queen Elizabeth delivered some top-notch banter with health leaders from across the United Kingdom as she awarded Britain’s health services with the George Cross medal.

Her Majesty was joined by Prince Charles as she delivered the medal to the essential staff from England, Wales, Scotland and Northern Ireland, praising the National Health Service (NHS) leaders for their handling of the global pandemic.

???? Representatives from the NHS in Wales, Scotland, Northern Ireland and England received medals on behalf of their many colleagues. pic.twitter.com/xqSvRWKGyN

The nurse said NHS staff were “terribly, terribly proud of the vaccination roll-out, it was so successful”.

“Yes, it was amazing,” the Queen replied.

The medal was presented to each NHS leader on a cushion, with Her Majesty touching the cushion to symbolise its presentation.

The George Cross is one of the highest awards given to British government officials for non-gallantry or gallantry, not in the face of an enemy, and is on par with the Victoria Cross, the highest award for military gallantry.

Lieutenant Colonel Michael Vernon, Comptroller of the Lord Chamberlain’s Office, began the ceremony by reading out the George Cross citation.

“It is with great pleasure, on behalf of a grateful Nation, that the George Cross is awarded to the National Health Services of the United Kingdom,” he said.

“This award recognises all NHS staff, past and present, across all disciplines and all four Nations. Over more than seven decades, and especially in recent times, you have supported the people of our country with courage, compassion and dedication, demonstrating the highest standards of public service.

“You have our enduring thanks and heartfelt appreciation.”

The Queen has been keeping up appearances since celebrating her Platinum Jubilee, with the aid of her walking stick close by.

Amidst continuing mobility and health concerns, the Monarch’s duties have been officially updated by Buckingham Palace, removing duties she “must fulfil” and entrusting these roles to her son, Prince Charles.

While the Queen’s new job description leaves her as “Head of State” and “Head of Nation”, Her Majesty is no longer required to attend specific events like the Opening of Parliament which was seen as necessary by “constitutional convention”.

The Queen’s new role and duties’ main focus is on providing support to the wider Royal Family while moderating the specific duties she is expected to perform.

Buckingham Palace has downplayed the significant change, saying it is nothing “drastic” but rather a small post-Jubilee update.