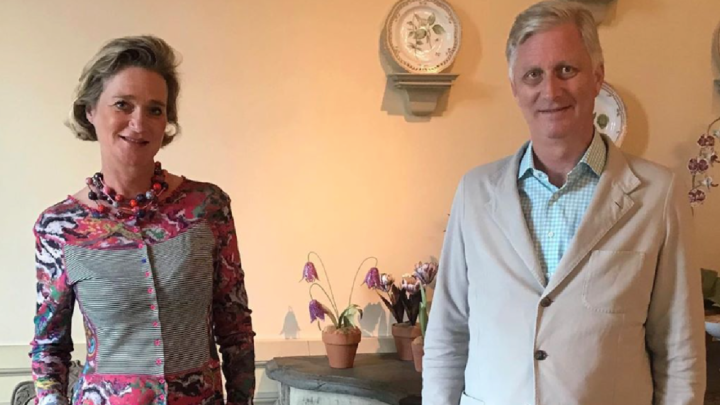 Delphine was granted the title of princess earlier this month. Source: Instagram.

The newly styled Princess Delphine of Belgium enjoyed an audience with her half brother King Philippe for the very first time this week, following a seven-year high-profile court battle to prove former King Albert II was her biological father. The royal siblings sat down together at the Castle of Laken last Friday, October 9, in what was described as a “warm meeting”.

A joint statement released by Philippe and Delphine on Thursday stated: “This extensive and special conversation gave us the opportunity to get to know each other. We’ve talked about our own lives and our common interests. This bond will develop further in the family context.”

Alongside the statement was a photograph of the pair, standing apart most likely due to Covid-19, smiling for the camera. The new princess looked vibrant in a brightly patterned button-up top, while the reigning king looked relaxed in a casual blazer and checked shirt.

Many royal followers commended the siblings on their dignified meeting, with one writing: “Hats off. A fine example of resilience.” While another commented: “How fantastic and what an example you are for many people!”

Another wrote: “Beautiful gesture from both sides! Love this new dynamic.” While another said: “Hats off, Sire. A royal gesture which honors you full of humanity and which I hope for your family and Delphine will protect you from media intrusion into your purely private sphere in the same way as for any other family. [sic]”

Boel, an artist whose mother had an affair with Belgium’s former King Albert II, won the legal right to be recognised as a princess earlier this month. Her lawyer shared the news with Belgium newspaper Het Nieuwsblad, revealing she would now be known as Delphine of Saxen-Coburg-Gotha, princess of Belgium.

“She is delighted with this court decision which ends a long process which is particularly painful for her and her family,” her lawyer said in a statement at the time. “A legal victory will never replace the love of a father but offers a feeling of justice, further reinforced by the fact that many children who have gone through the same ordeals will find the strength to face them.”

Not only is Boel now known as princess, the right has also been extended to her children Josephine and Oscar, now prince and princess of Belgium.

Boel launched her legal bid to be granted the same rights and titles as the 86-year-old former monarch’s other children – Philippe, now King of Belgium, Prince Laurent and Princess Astrid – in September, just months after Albert finally admitted he was Delphine’s father in January of this year, after a court-ordered DNA test came back positive.