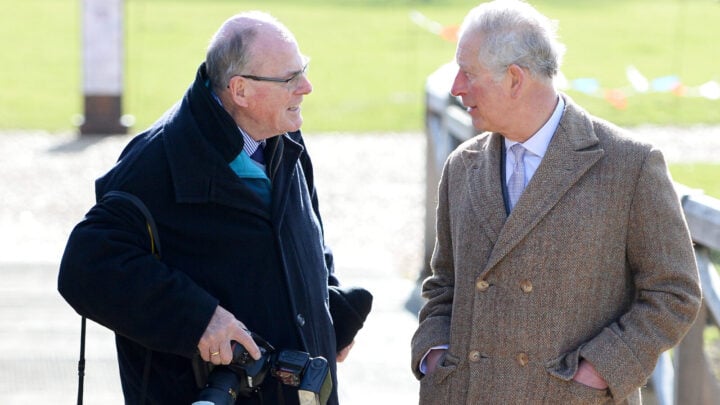 "From the most unusual vantage point of my 44 years of photographing the royals, I was close enough to see Prince Charles ... look broken," photographer Arthur Edwards (pictured above) wrote. Source: Getty

One of the royal family’s most trusted and esteemed photographers has shared the Duke of Edinburgh’s bizarre funeral direction, saying Prince Philip wanted him to photograph the family’s grief “up close” from a secret hiding spot at the chapel.

Arthur Edwards, 80, who has covered the royal family for more than 40 years, revealed on Tuesday that Philip had arranged for him to hide inside a fake church pillar to get up-close shots of his funeral. The revelation was made alongside several other frank comments on the popular UK television morning show Lorraine.

Edwards explained that the fake pillar was placed at the top of the stairs leading into St George’s Chapel, and included a letterbox-shaped slit, so he could photograph “the family’s pain up close”. The royal snapper told TV host Lorraine Kelly that it was just like the bird-watching hides where Philip spent hours during his retirement at Sandringham, his Norfolk estate.

“He organised the whole of the funeral arrangements and there’s never been a position in a hide before. He was a very keen birdwatcher and built many hides up in Sandringham, so I figure it [the fake pillar] must have been his idea,” he said.

The photographer was perched in his “hide” for three hours photographing every detail, but said the time “went like lightning”. “It wasn’t too bad, the palace press office actually pushed the boat out for me,” he said. “They provided me with a packed lunch and a beautiful, puffy, soft cushion with a crown on it to sit on.”

Edwards also wrote about his experience photographing the event in The Sun newspaper, revealing he clearly saw the “raw emotion” and “pain” of the royal family. “From the most unusual vantage point of my 44 years of photographing the royals, I was close enough to see Prince Charles – the man I have known for more than half his life – look broken. Close to tears, I could see he realised the weight of the task ahead to look after his mother and the monarchy,” Edwards wrote.

Edwards also spoke of the feud between William and Harry, writing that as the brothers passed him on their way into the chapel, they never once glanced at one another. He did, however, add that after the service the two were spotted chatting and walking together. “It was a sign I had been praying for, that this unique royal would show there is hope of a reconciliation in the house of Windsor,” Edwards wrote.

During the interview on Lorraine, the royal photographer added that the brothers’ feud “has got to stop – it’s stupid – it’s carrying on too long now”. While the presenter responded, “You need to bash their heads together.”

During the funeral procession, the brothers were notably separated by their cousin, Peter Phillips. The decision to keep the brothers apart only further highlighted the rift between the princes following Harry and Meghan’s explosive tell-all chat with Oprah Winfrey last month.

What do you think? Is this a great idea or a bit strange? Would you want photographs taken at your funeral?