Queen marks husband’s 100th birthday with rose in his name 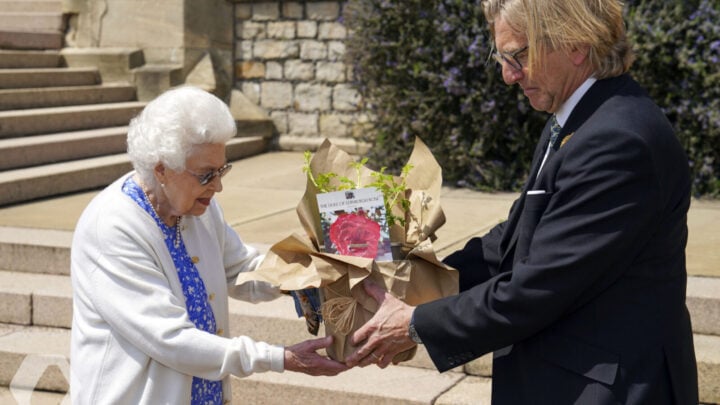 The Queen accepted a newly-bred rose in honour of the late Duke of Edinburgh. Source: Getty

The long tradition of naming flowers after royals has continued, with the Queen accepting a newly-bred rose in honour of her late husband on what would have been his 100th birthday.

Marking the solemn occasion on Thursday, the Queen accepted the ‘Duke of Edinburgh Rose’ from the Royal Horticultural Society (RHS) and watched on as it was planted in the Windsor Castle gardens.

The commemorative rose is deep pink, double-flowered and dappled with soft lines. According to The Telegraph, the monarch described the flower as “lovely” and the tribute to Prince Philip as “very kind”. In addition to an image of the rose, the label features a sweet picture of the duke wearing a white panama hat.

Her Majesty cut a very summery picture while accepting the rose bush from RHS president Keith Weed, wearing sunglasses and a soft-blue dress with a white floral pattern. She paired the dress with a white cardigan, a string of pearls and a patterned silk scarf.

Queen Elizabeth II receives a Duke of Edinburgh rose, given to her by Keith Weed, President of the Royal Horticultural Society, at Windsor Castle, Berkshire.

The commemorative planting comes just months after Prince Philip’s passing, on April 9. Sadly, a year ago to the day, the Queen was snapped outside Windsor Castle alongside her husband on his 99th birthday.

Beginning in the 18th century with Queen Victoria, whose eponymous flower is the Queen Victoria Lobelia, everyone from Queen Elizabeth to Princess Diana and little Princess Charlotte has at least one namesake bloom.

The Telegraph reported that during the planting ceremony, the RHS president told the Queen the rose was to commemorate all the “marvellous” things he had accomplished.

“It’s a rose named the Duke of Edinburgh Rose to mark his centenary and it’s a commemorative rose for all the marvellous things that he did over his lifetime and for everyone to remember so much that he did,” he said. “[For] each rose, there’s a donation that goes to the Living Legacy Fund, which will help more children.

“It’s a beautiful flower in itself, a double flower. Right now, with a cold spring and nature being a little bit behind, it doesn’t look so lovely there, but that’s what it [will] look like. The picture says it all.”

The new species was specifically bred following the Duke’s death in April. The rose variety will be available for sale, with £2.50 going toward to The Duke of Edinburgh’s Award Living Legacy Fund, which was set up by the Duke in 1956.

The monarch watched on as the rose shrub was planted at the front of the castle among the rest of the garden’s more mature rose plants, with the RHS president describing the moment as “poignant”.

“While being very poignant, it was also a delight to give Her Majesty the Queen, patron of the Royal Horticultural Society, the Duke of Edinburgh Rose to mark what would have been HRH The Duke of Edinburgh’s 100th birthday, and to remember his remarkable life,” he said.