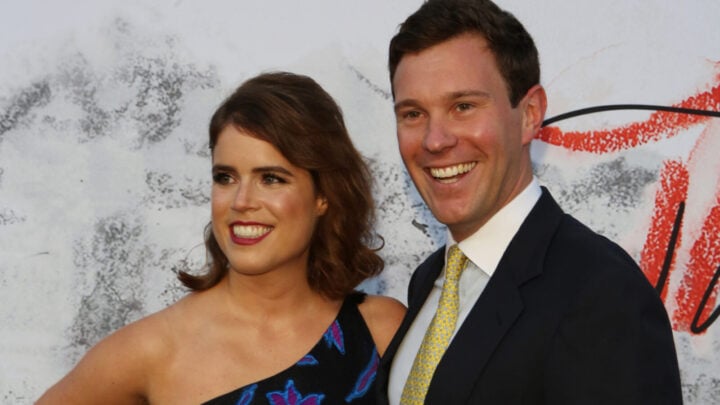 Princess Eugenie announced in September last year that she was expecting her first child with husband Jack Brooksbank, and now the royal baby’s due date has been revealed.

Hello! magazine claims Eugenie and Jack will welcome their first child, who will be the Queen’s ninth great-grandchild, in mid-February.

According to the publication, the parents-to-be are currently residing at Frogmore Cottage, the Duke and Duchess of Sussex’s home on the Queen’s Windsor estate. Eugenie and Jack, who married in October 2018 at a regal ceremony watched by millions across the world, were living in three-bedroom Ivy Cottage on the grounds of Kensington Palace.

“Eugenie and Harry have always been close and they chat privately all the time,” a source tells Hello! magazine. “It was Harry who suggested she and Jack could use Frogmore Cottage because it is much bigger than their cottage at Kensington Palace. It is a case of one family member reaching out to another.”

Princess Eugenie announced her baby news on her personal Instagram account last year. Taking to Instagram at the time, the princess posted a picture of small bear booties with the caption, “Jack and I are so excited for early 2021 …”

Buckingham Palace also confirmed the news, commenting at the time, “Her Royal Highness Princess Eugenie and Mr Jack Brooksbank are very pleased to announce that they are expecting a baby in early 2021. The Duke of York and Sarah, Duchess of York, Mr and Mrs George Brooksbank, The Queen and The Duke of Edinburgh are delighted with the news.”

The baby will be the first grandchild for Prince Andrew and the Duchess of York.

At the time, royal fans were quick to congratulate the couple on the exciting news, with one writing, “Congratulations! All the best!”

Another added, “So exciting… cannot wait to see your baby!” While a third wrote, “Congratulations, so happy for you and your husband.”

Eugenie and Jack’s little bundle of joy isn’t the only royal baby due this year either. Eugenie’s first cousin Zara Tindall is also expecting this year. Her husband Mike announced the happy news on his podcast The Good, The Bad & The Rugby in December last year, telling his co-hosts, “It’s been a good week for me, had a little scan last week. Third Tindall on its way.” Zara and Mike already have two daughters: six-year-old Mia and two-year-old Lena.

Are you excited for Princess Eugenie?