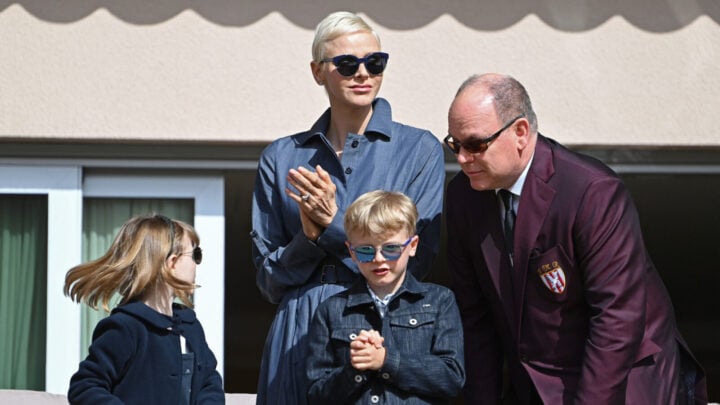 Charlene appeared alongside her family last week, April 30, when she stepped out at the Monaco E Prix race for the first time since being treated for ongoing, undisclosed health issues. Source: Getty

Princess Charlene of Monaco has returned to the public eye for a second time since her most recent surprise public appearance at the Monaco E Prix race on Saturday, April 30.

The 44 year old made her second appearance since returning to her Monaco home alongside husband, Prince Albert and 7-year-old twins, Princess Gabriella and Prince Jacques at the Sainte Dévote Rugby Tournament on Saturday, May 7.

The Princess was pictured at the event looking solemn and dutiful as she donned a casual collared blue blazer dress and matching belt and waved to onlookers and managed a steady smile. She also took to Instagram on Sunday, April 8, to share a number of photos from the event, with the caption, “Great day at St Devote Rugby, God bless you all”.

Charlene also appeared alongside her family on Saturday, April 30, when she stepped out at the Monaco E Prix race for the first time since being treated for ongoing, undisclosed health issues. For the event, Charlene unveiled her new platinum blonde, modelesque, pixie cut and wore an oversized grey blazer suit and matching trousers.

A number of fans have since noted that the Princess appears anything but content as she returns to the public eye, taking to social media to share their doubts and concerns for Charlene’s ‘true’ health condition, with some suggesting her state of mind is the real cause for her absence.

In a recent news article shared to Facebook, a number of fans commented on the Princesse’s strained appearance.

“Gosh the photo with her daughter is so clear.She looks distraught . It’s a wonder the palace allowed these to be released perhaps trying to prove she is back with her family but gosh anyone looking at those can see the absolute pain despite the facade and she clearly cannot fake it,” one fan wrote.

“Her eyes say it all. This is not a happy woman,” another commented. She tried to ‘run away’ before her marriage…..should’ve have followed through… should’ve known it wouldn’t end well from Princess Diana’s experience…. sure she has 2 beautiful children, like Diana, but her mental health is clearly suffering.”

Charlene has made regular headlines over the last year after she was admitted to hospital in May, 2021 after contracting a severe ear, nose and throat infection (ENT) while on a trip in South Africa to raise awareness around rhino poaching.

The Princess reunited with her husband Prince Albert in November, 2o21, however, only days later the royal was missing in action yet again after the Palace announced she would be recovering in a Swiss clinic. Soon after, Prince Albert revealed his wife “was clearly exhausted, physically and emotionally” and that she would need further time to recover before returning to official duties.

As a result of the Princess’s long absence from the public eye, speculation has arisen about the Princess’s relationship with Prince Albert, with a number of fans suggesting the couple could be experiencing issues.

“I’m probably going to say this several times, but this has nothing to do with our relationship,” the Prince revealed to People magazine.

“I want to make that very clear. These are not problems within our relationship; not with the relationship between a husband and wife. It’s of a different nature.”

Speculation of marriage troubles aside, Princess Charlene recently took to social media over the Easter weekend to share a heartwarming family portrait.

Charlene lounged alongside a pool with her husband Prince Albert II and their two children Prince Jacques and Princess Gabriella.

What do you think of the Princess's most recent public appearance?