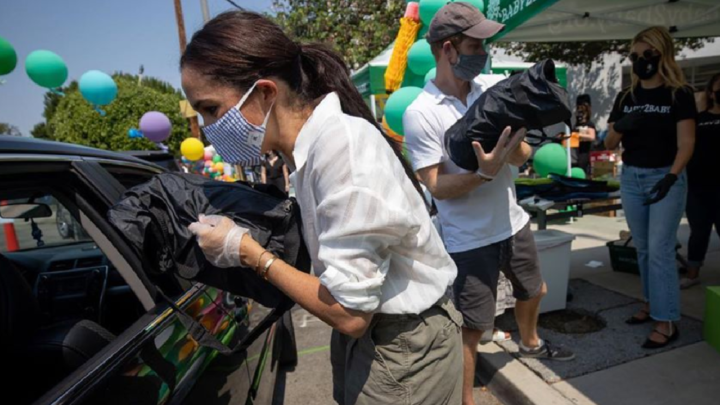 The Duke and Duchess of Sussex volunteered at a drive-through event on Friday. Source: Instagram/Baby2Baby.

The Duke and Duchess of Sussex have kept a relatively low profile in recent months, since announcing their decision to step down as senior members of the British royal family and subsequently establishing a new life for themselves and son Archie in Los Angeles.

But this week, Prince Harry and Meghan made a rare public appearance as they volunteered at a charity drive-through event on Friday, passing out essential school supplies to families in need ahead of the new school year.

The duke and duchess looked delighted to be working with local LA charity Baby2Baby and could be seen smiling and chatting with locals as they collected their essentials. And both Harry and Meghan were dressed casually for the occasion, with Meghan donning a white linen shirt and khaki shorts, while the prince sported a white polo shirt with grey shorts and a matching cap.

Several images of the Sussexes lending a hand were shared on social media by Baby2Baby, alongside the caption: “Baby2Baby was proud to host a drive-through distribution at Knox Elementary in South LA as students across the country return to distance learning this week.

“Thank you to The Duke and Duchess of Sussex for joining our team to help us distribute school supplies, clothing, hygiene items, food and more to children who need these basic essentials more than ever during this unprecedented back to school season.”

While they may not have been photographed out and about in recent months, Harry and Meghan have taken part in several video conferences in recent months. Earlier this week, the couple took part in a call with young leaders as part of the Queen’s Commonwealth Trust, which focused on using digital platforms for good.

In the video call, Meghan, 39, said she was “incredibly proud” to be continuing Her Majesty’s legacy.

“From my stand point, being newer to the world of the Commonwealth, living in Canada for several years — it wasn’t until joining the family that I was able to meet so many young people throughout the Commonwealth that came with the question, but always offered a solution,” she said.

“And that’s what I think is so inspiring and why I’m incredibly proud to be able to work with the Queen’s Commonwealth Trust… it’s the continuation of a legacy of your grandmother.”

Harry, 35, also praised his grandmother for her hard work, saying: “I think everything that my grandmother wanted to achieve when she took this huge responsibility on, she’s managed.”

Are you a fan of the royal family? Or are you uninterested?