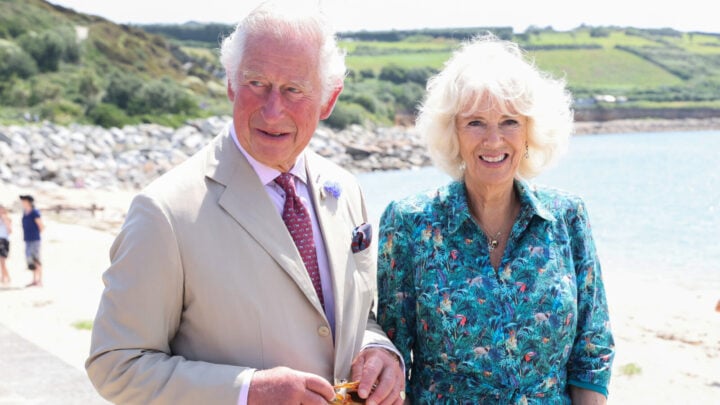 Princes Charles and Camilla pictured out and about during a visit to Isles of Scilly. Source: Getty

Prince Charles and Camilla, Duchess of Cornwall, put on a brave face on Tuesday during a visit to Isles of Scilly, in southwest England. The royal couple are currently touring Devon and Cornwall.

It was the first time the couple have been spotted since Charles’ son Prince Harry announced he’s writing a memoir about his life — and if it’s anything like his tell-all chat with Oprah Winfrey, it’s going to be a doozy!

Charles and Camilla’s official Instagram page, Clarence House, shared several pictures and videos from the big day, with the first image showing the couple walking along Porthcressa Beach. The second snap was a video of Charles examining a veggie patch, while a third pic showed Camilla posing with a group school children. For the occasion, Camilla opted for a summery blue-green dress, which appeared to have different pictures of birds on it.

“At Five Islands Academy School, Their Royal Highnesses arrived in a GO-EV Car Share vehicle, one of a fleet recently installed on the island to encourage sustainable travel. At the school, The Duke was given a tour of the fruit and vegetable patch, while the Duchess joined a special story time.”

Random House announced on Monday that Prince Harry would be writing an “intimate and heartfelt memoir”.

“Prince Harry will share, for the very first time, the definitive account of the experiences, adventures, losses, and life lessons that have helped shape him,” the publishing company wrote on Twitter.

“Covering his lifetime in the public eye from childhood to the present day, including his dedication to service, the military duty that twice took him to the frontlines of Afghanistan, and the joy he has found in being a husband and father, Prince Harry will offer an honest and captivating personal portrait, one that shows readers that behind everything they think they know lies an inspiring, courageous, and uplifting human story.”

Meanwhile, in a press release following the announcement, Harry said he was “writing this not as the prince I was born but as the man I have become”.

“I’ve worn many hats over the years, both literally and figuratively, and my hope is that in telling my story — the highs and lows, the mistakes, the lessons learned — I can help show that no matter where we come from, we have more in common than we think,” he said. “I’m deeply grateful for the opportunity to share what I’ve learned over the course of my life so far and excited for people to read a firsthand account of my life that’s accurate and wholly truthful.”

Are you a fan of Charles and Camilla?