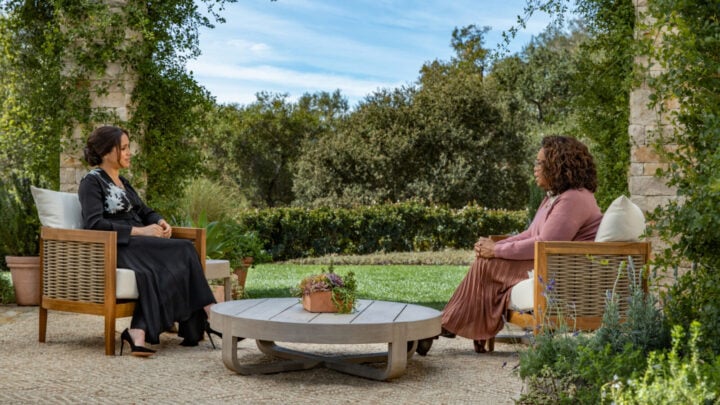 In a previously unaired clip from the interview with Oprah Winfrey on Sunday night (local time), Meghan has broken her silence and opened up about her strained relationship with her dad Thomas Markle for the first time.

The pair fell out years ago, after it emerged the retired lighting director had staged paparazzi photos ahead of the royal wedding and had leaked a personal letter from his daughter to the press some months later.

When Oprah asked Meghan if it felt like “betrayal” when she found out her father was “working with the tabloids”, Meghan responded, “We called my dad and we asked him, and he said, ‘No, absolutely not.’ I said, ‘You know the institution has never intervened in anything for us but they can try to go in and kill this story. But if they do this once, we’re not going to be able to use that same leverage to protect our own kids one day.'”

The duchess went on to say that she had pleaded with her father to just be honest. “I said, ‘I just need you to tell me, if you tell me the truth, we can help.’ And he wasn’t able to do that, and that for me has really resonated, especially now as a mother.”

She continued, “I look at Archie … and I genuinely can’t imagine doing anything to intentionally cause pain to my child … So it’s hard for me to reconcile that.”

The rocky relationship between the pair has sadly played out in the public eye ever since Thomas, 76, set up a series of paparazzi shots ahead of his daughter’s wedding, which he then had to pull out of at the last minute after suffering a heart attack.

In February 2019, the tension between the two hit the spotlight once again as Thomas shared extracts from a heartbreaking five-page letter – which was allegedly written by the Duchess of Sussex herself – with the Mail on Sunday, showing the depths of his daughter’s grief over their estrangement.

The American-born royal later sued Associated Newspapers Limited (ANL), publishers of the Mail On Sunday and MailOnline, over the letter extracts, and has more recently claimed victory. In February this year, a High Court judge ruled the articles breached her privacy, but said some issues relating to her copyright of the letter would have to be settled in court at a later date.

In the same interview with Oprah this week, Meghan also opened up about her estranged half-sister Samantha Markle, who recently released the tell-all book The Diary of Princess Pushy’s Sister: A Memoir (Part 1).

“I grew up as an only child and I wished I had siblings,” Meghan said, adding that she hasn’t seen her half-sister in at least 18 years. “She changed her last name back to Markle only when I started dating Harry, so I think that says enough.”

Read a recap of the Duke and Duchess of Sussex’s interview with Oprah here.

What do you think of these new revelations regarding Thomas Markle?