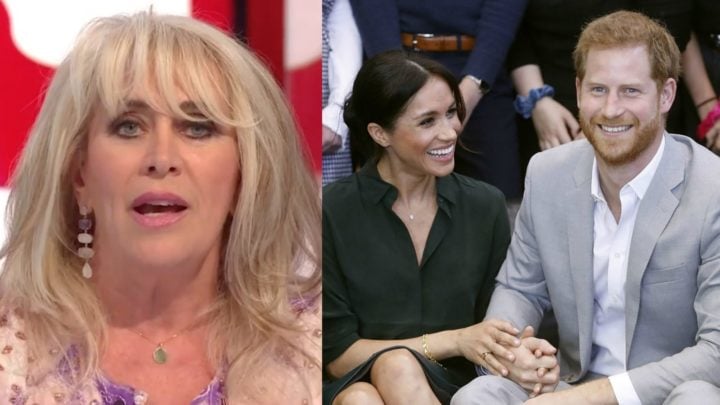 Royal expert Carole Malone has slammed the Duke and Duchess of Sussex's plans for their baby's arrival. Source: Sky News via The Sun/Getty

A British commentator has appeared on national television to slam the Duke and Duchess of Sussex over their plans to keep the arrival of their first child private and away from the public eye.

Carole Malone was a guest on Sky News on Friday when she declared the couple’s decision not to appear in public with their baby soon after its birth was a “slap in the face” to the British people and royal fans around the world.

While other royals, including Princess Diana and the Duchess of Cambridge, have appeared on the hospital steps for a brief photocall after their children’s births, Harry and Meghan announced last week they plan to “celebrate privately as a new family” before sharing the news with the public.

The announcement followed reports Meghan plans on delivering her baby at the couple’s new home Frogmore Cottage in Windsor and will therefore forego the highly anticipated hospital steps photoshoot.

Speaking about the decision on Sky, Malone chastised the couple for blocking out the media and the public after they had spent months celebrating the royal pair and their happy baby news.

“Someone needs to explain to me how a statement announcing the baby’s name, weight and gender, would invade their privacy or deny them precious family time,” Malone said.

“This is an unprecedented slap in the face for those legions of decent ordinary people who love the royal family and who think the royal birth as a national celebration.

“No one is expecting Meghan to parade her baby minutes after giving birth, and, of course, they’re entitled to private time with the Baby Sussex.

“But how hard would it be to spend two miserly minutes outside the hospital waving and smiling at people who only want to wish them well?

“Us Brits give so much to the royal family, and we also pay for the privilege of having them. Isn’t it time the royals gave something back?”

It comes after the royals released a statement detailing their plans for their baby’s arrival and putting an end to months of speculation over how they would announce the new royal’s birth.

“The Duke and Duchess of Sussex are very grateful for the goodwill they have received from people throughout the United Kingdom and around the world as they prepare to welcome their baby,” they said in a statement via the palace.

Meghan also decided against giving birth at the Lindo Wing at St Mary’s hospital in London where other royals, including Princess Anne, Princess Diana, the Duchess of Cambridge and Zara Tindall, have given birth under the care of the royal family’s doctors.

It’s believed Meghan wants a more natural birth and took inspiration from the Queen, who gave birth to all four of her children at home in either Buckingham Palace or Clarence House. The Queen herself was also delivered in her parents’ Mayfair home, as part of a long-standing royal tradition.

According to reports in the British media, Meghan’s mother Doria Ragland is expected to fly to England for the arrival of her first grandchild, while the former actress’s father Thomas Markle will not be involved in any way.

What are your thoughts on this? Do you think Meghan and Harry owe it to the public to share their baby news as soon as it arrives? Or should they be able to celebrate in private for as long as they wish?