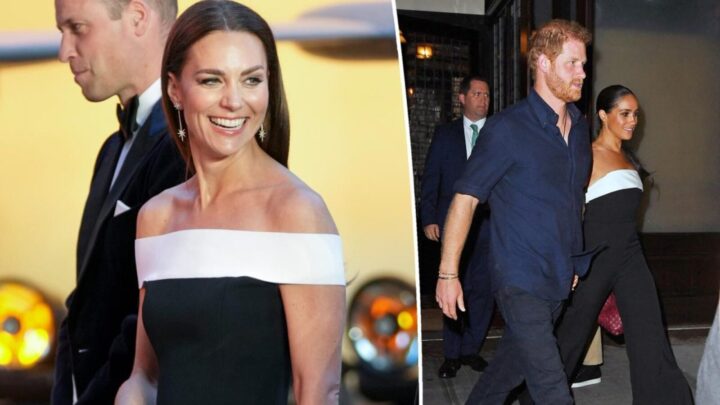 Only months ago in May 2022, Catherine, the Duchess of Cambridge wowed royal fans and movie buffs during her red carpet appearance at the premiere of Top Gun: Maverick.

The royal stole the show at the UK premiere of the blockbuster sequel as she gracefully arrived at the premiere wearing a Roland Mouret “Lamble gown”, out-sparkling every A-lister in attendance.

While the outfit shared an identical top, Kate’s featured an off-the-shoulder design while Meghan’s was strapless. The Duchess of Cambridge’s outfit was also a gown whereas Meghan’s was a jumpsuit by Gabriela Hearst.

Where Kate wore her hair down, pairing her red carpet ensemble with black pumps and a simple black clutch, Meghan opted for a sleek ponytail, completing her Hearst jumpsuit with strappy, open-toed heels from Aquazzura, and a red woven Bottega Veneta bag.

Both royal women, however, kept their make-up natural and rocked a subtle smokey eye look.

While Kate had also altered her Mouret gown, to be more modest as the original design featured a sheer, mesh, zip-down back, it is understood that Meghan had not made any alternations for her jumpsuit.

Though we know who wore it first, Twitter users have shared their own opinion on who wore it better.

Many have taken to sharing side-by-side images of the Duchess of Cambridge and Duchess of Sussex, with one user tweeting, “The difference between Class and Ass.”

Some users were also less than kind with their thoughts on the twinning nature of the looks.

MM likes to plagiarize speeches and quotes from others, and we’ve all seen how she tries to copy Catherine’s style (even lacking elegance and class).
Doesn’t she think she is an independent woman? How come she doesn’t have original ideas of her own? ????

Meghan successfully underlining how much less attractive, stylish and original she is than Kate.

I think it’s time @KensingtonRoyal took out a restraining order on this stalker lunatic. pic.twitter.com/nUUWOGXJ3D

Other Twitter users have also alleged that Meghan had copied Kate’s look, the way Prince Harry had “copy and pasted” his recent UN speech from that of his brother, Prince William.

No, she COPIED the real Duchess. As she copied part’s of William’s speech she gave to H.

While others noted that it was likely Meghan had simply looked to her sister-in-law for style inspiration.

Or maybe, both ladies channelled Queen Maxima as inspiration for the looks as avid royal watchers will know that the Queen of the Netherlands wore a combination of the two outfits back in 2017.

Queen Maxima wore a Danielson jumpsuit by Roland Mouret, the same designer of Kates’s Top Gun gown, to the opening of the new season of Royal Concertgebouw Orchestra (RCO) at Concert Hall in Amsterdam. The jumpsuit, just like Kate’s, features a white off-the-shoulder top that exposed her collarbones but had the same jumpsuit cut as that of Meghan.

This isn’t the first time Kate and Meghan have been fashion doppelgängers. The International Business Times has even pointed out the multiple occasions that the Duchess of Sussex wore outfits that were a little too much like Kate’s to be a coincidence.

But with Meghan and Kate sharing similar tastes when it comes to clothes and labels, it’s likely this won’t be the last time we see these two don the same look.

Who do you think wore it better?