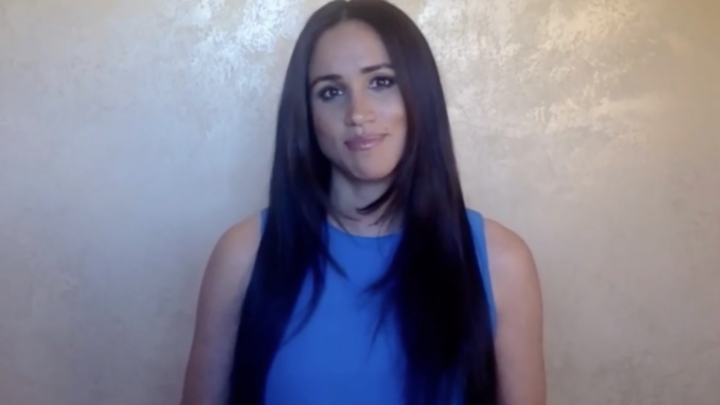 The Duchess of Sussex delivered a keynote speech as part of the Girl Up Campaign. Source: Instagram/Girl Up.

“Meghan is back” – that was the rallying call of the Duchess of Sussex’s supporters after she delivered a powerful keynote speech on Tuesday. The duchess delivered the eight-minute address as part of the Girl Up Leadership Summit, which is “a movement to advance girls’ skills, rights, and opportunities to be leaders”.

Meghan can be seen speaking from the rented mansion in Los Angeles, where she has been living with Prince Harry and one-year-old son Archie since March, in the pre-recorded video which was shared on social media following yesterday’s event.

Speaking candidly about issues such as gender, race and climate change, the duchess called on young girls to focus on “building each other up, instead of tearing each other down”.

“Your generation is often referred to as digital natives, and you understand that our online world has the power to affirm and support as much as it does to harm,” Meghan said. “We are not meant to be breaking each other down; we are meant to be building each other up.

“So use your voice both on-and-offline to do just that – build each other up, support each other. There will always be negative voices and sometimes those voices can appear to be outsized, and sometimes they can appear to be painfully loud. You can and will use your own voices to drown out the noise. Because that’s what it is – just noise. But your voices are those of truth. And hope. And your voices can and should be much louder.”

The duchess also touched upon the growing Black Lives Matter movement and said she believes that society is on the “precipice of transformation”. Meghan continued: “That path to get us there will take all of us. It will take girls and women, it will take men and boys, it will take those that are Black and those that are white, collectively tackling the inequities and structural problems that we know exist.”

She added: “This is a humanity that desperately needs you. To push it. To push us, forcefully in a more inclusive, more just, and more empathetic direction and to not only frame the debate, but to be in charge of the debate. Racial justice, on gender, climate change, mental health and well beak, on civic engagement, on public service, on so much more.”

Meghan’s speech sparked a huge reaction, with many people commenting that she was “back”, following her departure from the senior ranks of the British royal family earlier this year.

One person wrote: “What an amazing and powerful message from our favorite duchess Meghan, she’s really an inspiration.” Another said: “So happy to see our beautiful Meghan looking like her old self again.”

It comes just weeks after Meghan delivered a powerful speech to the graduating class at her former high school, Immaculate Heart, in Los Angeles, in which she addressed the killing of George Floyd in Minneapolis in May.

“What is happening in our country and in our state and in our hometown of LA… I wasn’t sure what I could say to you. I wanted to say the right thing,” Meghan said in the six-minute video, as she directly addressed the teenage students.

Meghan also discussed her own experience of the Los Angeles riots in 1992, remembering the sight and smell of ash and smoke in the air as a young schoolgirl.

What do you think of Meghan's speech?