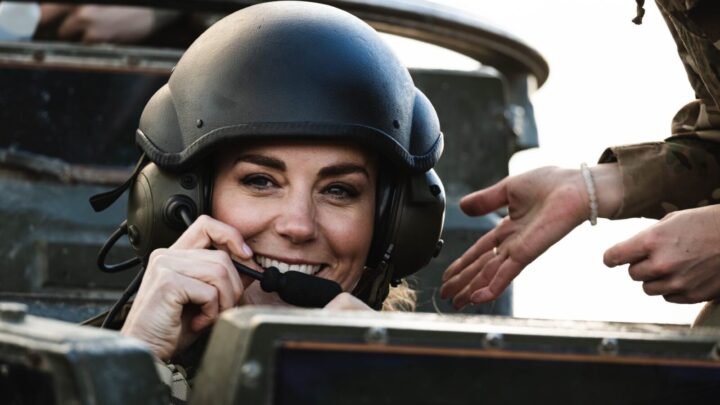 The Duchess of Cambridge shared a touching tribute to the UK's armed forces. Source: Twitter @Canellelabelle

Catherine, Duchess of Cambridge, has paid a heartfelt tribute to the brave men and women of the UK’s armed forces on Saturday, June 25.

Sharing photos from her memorable visit to the Pirbright Training Academy, in November last year, Kate was snapped stepped into full combat gear as she spent time with the 101 Operational Sustainment Brigade at Abingdon Airfield, where she learned about new recruits and the way in which serving personnel are trained.

Not one to miss out on a hands-on learning experience, the charming Kate even partook in some of the training exercises during her visit, learning first-hand how to operate an army tank.

The collection of photos shared on the Duke and Duchess’s joint Instagram page showed the 40-year-old, mother of three, closely examining the military machinery while she donned deep green camouflage and chunky ear defenders.

Kate was all smiles as she was snapped in full headwear with a microphone close to her mouth as she sat behind a screen.

Along with the wonderful pictures, the Duchess penned a heartfelt message, she wrote: “Today on Armed Forces Day, William and I would like to pay tribute to the brave men and women, past and present, serving in all of our armed forces, at sea, on land and in the air, here in the UK and around the world. Thank you for all you and your families sacrifice to keep us safe.”

Adding how “honoured” she was to spend time with the British army and how “wonderful” it was for her to see first hand how the “many important and varied roles the military play day in, day out to protect us all.”

Back in September 2021, the Duchess of Cambridge paid a visit to RAF Brize Norton in Oxfordshire to meet the military personnel who helped evacuate Afghan refugees during the Taliban takeover of Afghanistan.

The royal met with both military members and civilians who were directly involved in the evacuation efforts, including the RAF aircrew and medics who aided evacuees at the Kabul airport and volunteers who helped provide key supplies to those arriving in the UK.

Her own husband, Prince William, also holds the rank of Flight Lieutenant at the Royal Airforce.

The Duke earned his RAF wings back in April 2008 after an intensive 12-week course and is also trained as a helicopter pilot, even working alongside the Search and Rescue Force.

The release of the new photos comes just days after William and Kate attended the unveiling of their first official joint royal portrait. The incredible painting was commissioned last year by the Cambridgeshire Royal Portrait Fund and was painted by award-winning British portrait artist Jamie Coreth.

“It has been the most extraordinary privilege of my life to be chosen to paint this picture,” Coreth had said. “I wanted to show Their Royal Highnesses in a manner where they appeared both relaxed and approachable, as well as elegant and dignified.”

The new royal portrait will be on display at the University of Cambridge’s Fitzwilliam Museum for three years before it’s exhibited in other galleries in Cambridgeshire.