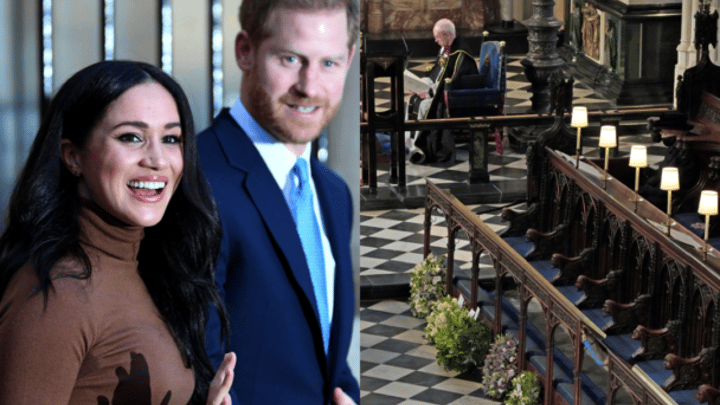 Harry's wife Meghan reportedly sent a handwritten note with a colourful wreath to be laid at the service. Source: Getty

While Prince Harry had returned to the UK for the sombre event, which marked his first trip back home since calling it quits on royal life last year, his wife Meghan was unable to join him. A royal spokesman previously confirmed that the former actress, who is expecting the couple’s second child sometime between June and August, had been advised by her physician not to travel.

However, the Duchess of Sussex ensured she still played a role in Prince Philip’s funeral, despite being unable to attend. It was reported earlier this week that she had sent a handwritten note with a colourful wreath to be laid at the service at St George’s Chapel at Windsor Castle on Saturday. The wreath in question featured an array of locally sourced flowers with sentimental touches to honour the Duke of Edinburgh, however some royal fans are now questioning how something that’s supposed to be private has made its way into the public domain.

According to The Telegraph, “a source close to the Sussexes confirmed that (the wreath) had been designed and handmade by Willow Crossley, a Cotswolds florist known for her natural, rustic arrangements”.

People aren’t too happy with what appears to be the Sussexes’ decision to go public, considering the fact other members of the royal family kept details of their wreaths private.

News.com.au published an opinion piece written by Daniela Elser on Sunday, which questioned the duchess’ motives. “What is bewildering here is why and how, on a day which should have been resolutely, solely focused on celebrating the Duke, that still something Sussex-related has managed to end up in the headlines,” she wrote.

“These symbolic and meaningful blooms by Ms Crossley – who was in charge of the flowers for the Sussexes’ wedding reception and son Archie’s 2019 christening – included deeply personal touches. But why did anyone feel the need to share this information with the world?”

Royal fans have also taken to social media to weigh in on the debate, with one questioning, “Who leaked the information about the wreath to the press? The press hasn’t reported on what the other eight wreaths were made up of and who they were from… just asking.”

Another commented, “Odd that no other members of the family sought to publicise their wreaths and personal messages.”

While a third also questioned, “And who let it be known what flowers in wreath meant etc, when details about every other wreath have been kept private – as it should be?”

However, others thought the gesture was sincere, with one writing, “The thought, sincerity and meaning behind the selection of Harry and Meghan’s wreath for Prince Philip is such a sweet addition.”

There’s also reports around Tuesday morning that Prince Harry, who was due to fly back to the US on Monday, will now be staying in the UK slightly longer, and may even remain for the Queen’s birthday on Wednesday this week.