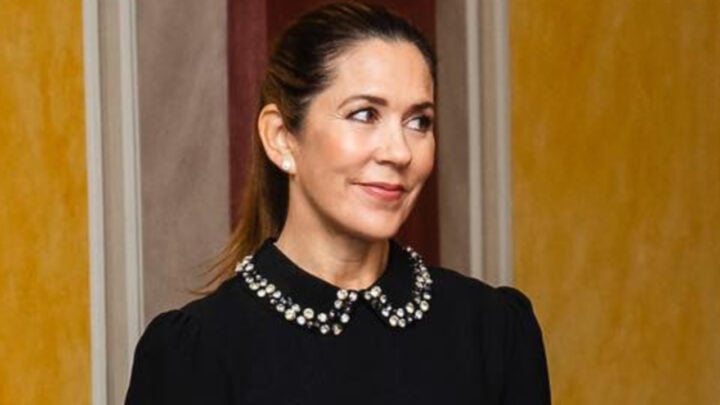 Crown Princess Mary rarely puts a foot wrong when it comes to fashion and the Australian-born royal looked as sophisticated as ever as she conducted a solo engagement in the Danish capital on Monday.

The mother-of-four, who married into the Danish royal family in 2004, met with David Beasley and Rasmus Prehn from the United Nations’ World Food Programme (WFP), which was awarded the Nobel Peace Prize for 2020.

And the Hobart native looked sensational for the outing, wearing a super stylish pair of light grey tailored pants, with buckle detailing, which she paired with a dazzling black blouse which ensured she stood out from the crowd thanks to its jewel-encrusted collar. Mary finished the classy ensemble with a pair of suede Gionvito Rossi stiletto heels, natural make-up and pulled her long locks back into a sleek ponytail.

“Today, I had the pleasure of meeting with David Beasley, Executive Director for World Food Programme (WFP) and Rasmus Prehn, Danish Minister for Development Corporation and had the opportunity to congratulate WFP on being awarded this years’ Nobel Peace Prize,” a statement shared on the royal family’s official Facebook page read.

“WFP was recognised for its efforts to combat hunger, to create better conditions for peace in conflict-affected areas, and for its work to prevent hunger from being used as a weapon in conflicts.

“During our meeting, I was choked to hear how many millions of people are forecast to face extreme food insecurity in the coming years, primarily due to conflict and migration. Thankfully, learning more about WFP’s strategic plans and work, which is strongly supported by Denmark, helps in remaining optimistic. However, overcoming such a huge and complex challenge, will require the world to stand united.⁣”

In the first picture, which was posted to the Danish royal family’s Instagram page, the prince, who is second in line to the Danish throne behind his father Prince Frederik, can be seen posing in a khaki shirt and navy pants, while another snap shows him posing cooly in a navy-blue sports jacket, white dress shirt and beige pants.

The third image sees him in the same outfit only this time looking away from the camera and in black-and-white. While the third image is a close up of Prince Christian smiling widely at the camera.

Are you a fan of Princess Mary? Do you like to read about her engagements?