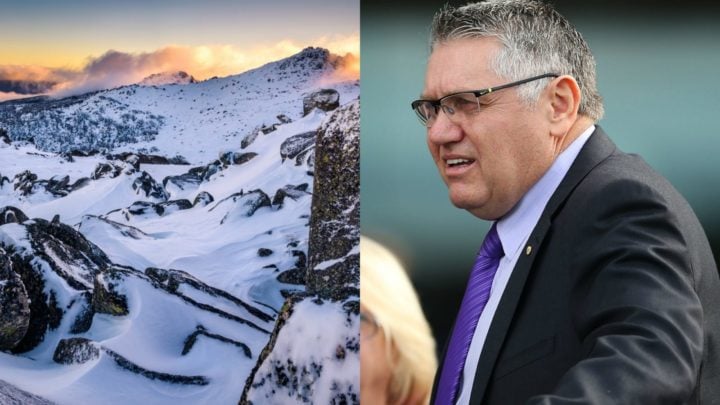 Ray Hadley slammed a hiker after it was revealed he wasn't appreciative a rescue team travelled more than five hours through blizzard conditions to reach him. Source: Getty

Radio presenter Ray Hadley has vented his frustration towards an “ungrateful” hiker who had to be rescued in the Snowy Mountains recently. Speaking to a senior police commander about the incident during his segment on 2GB, the broadcaster slammed the hiker after it was revealed he wasn’t appreciative of the rescue team’s efforts in blizzard conditions as they refused to pack up and take his belongings.

Superintendent Paul Condon told the radio presenter on air on Tuesday: “To be honest, that person wasn’t real happy that the police didn’t then remove all of his equipment as well at the same time. They said ‘no, you have to walk out’.”

The 45-year-old man called for help just after 4am on Friday from the Kosciuszko National Park in New South Wales and asked to be evacuated after being inundated with snow when his tent collapsed. Rescue crews responded immediately, hiking more than five hours through dangerous conditions to reach him.

However, instead of showing his appreciation, the man wasn’t thrilled that the police couldn’t retrieve his belongings and equipment, despite the fact the officers risked their lives to go and rescue him — and the whole ordeal didn’t sit well with the radio presenter.

“Are you telling me that this ungrateful b****rd, you said your officers went five hours in blizzard conditions, they get in there in the small hours of Friday morning and this imbecile, puts on a blue that he wants his gear packed up and brought back with him?” Hadley continued: “We’re not here for you convenience, we’re here to save your life, you dope.”

Superintendent Codon added: “That’s correct Ray. It is very frustrating… It took my rescue team nearly five hours to reach this person, tracking it on foot, [they] couldn’t see their hands in front of their face… [They] risked their lives to go and rescue this gentleman.”

Meanwhile, earlier in the chat, Superintendent Condon said people need to be prepared and well-equipped before heading out in the snow, warning: “There’s a high risk for not only the people that need help but my officers that are going out there and putting themselves at risk to recover these people.”

He continued: “That’s the most frustrating part of our jobs sometimes. As you would know, some of things we comes across and people just disregard the warnings and think they have capacities well beyond what they really have.”

Hadley, agreed with the senior police commander, adding: “I just don’t understand the common sense factor here, it’s escapes me. The message is there Paul that we need to make sure if we’re going into these areas we check Facebook, we check local media and we make sure we’re equipped and if you can’t go out, don’t go out. Stay in the lodge and have a couple of coffees.”

This isn’t the first time a snowy rescue mission has made headlines in the past week. On Monday, a father and his 10-year-old daughter became trapped after leaving the Thredbo resort area, but were thankfully found shortly after.

“A father and daughter have been found safe and well after a search operation at Thredbo. Police would like to thank the media and community for their assistance,” police said in a statement on Monday afternoon.

Have you been following this story? Do you agree with Ray Hadley? Do you think the hiker was ungrateful?