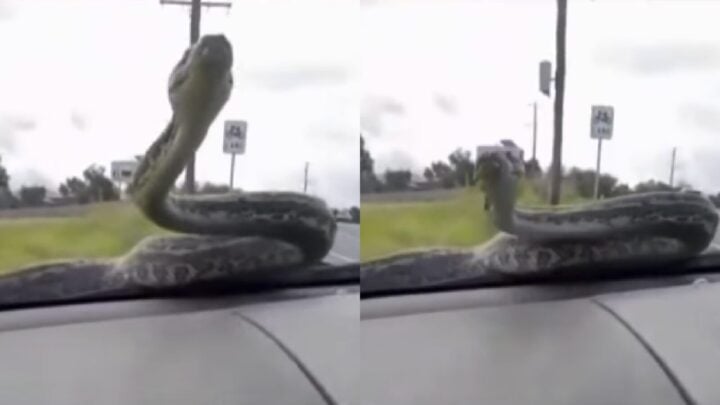 The snake slithered its way on the front of the family's car. Source: 7News Adelaide/Facebook.

A Queensland family got the fright of their lives after a large python slithered its way onto their windscreen. In the terrifying video, which was filmed by one of the passengers and later shared on 7News Adelaide’s Facebook page, the snake can be seen moving about on the front of the family’s car.

In the video, a male passenger can be heard saying “that is huge”. A young girl can then be heard shouting to the male passenger, “we’re not driving home with it” before suggesting they call a snake catcher. It’s not clear how many people were in the car the time, but several squeals can also be heard in the background.

The terrifying ordeal comes just a few months after another Queensland driver had a close encounter with a snake while he was driving. The man was confronted with the unexpected danger as he cruised along the Dawson Highway, west of Calliope, back in June, after a deadly eastern brown snake began to wrap itself around him. The tradie, identified only as ‘Jimmy’, used a work knife and his seat belt to kill the snake — which is highly venomous and one of the most dangerous in the world — acting out of fear for his own life.

The 27-year-old, from Gladstone, was travelling along the rural highway at 100 kilometres per hour at around 5pm on June 15 when he realised he was no longer alone in the car. But as he tried to press the brake and bring his ute to a stop, the snake began striking at the seat between his legs.

Jimmy was left with no choice but to kill the snake, despite the animals being protected under the Nature Conservation Act 1992, and was making his way to the hospital when he was pulled over by Queensland Police for speeding, believing he’d been bitten by the deadly reptile.

QPS released footage of the moment they pulled Jimmy over, having clocked him driving at speeds of more than 120km/h. However, the officer was given an unlikely story when he approached the clearly panicked driver.

“I’m driving along at 100, and I just started to brake,” Jimmy could be heard telling the officer in the chest-cam footage. “…And the more I moved my legs… it just started to wrap around me. Its head just started striking at the (driver’s seat) chair, between my legs.”

Paramedics attended the scene and it was determined that Jimmy had not actually been bitten by the snake but was suffering shock from the ordeal.

Have you ever encountered a large python? How did you react?