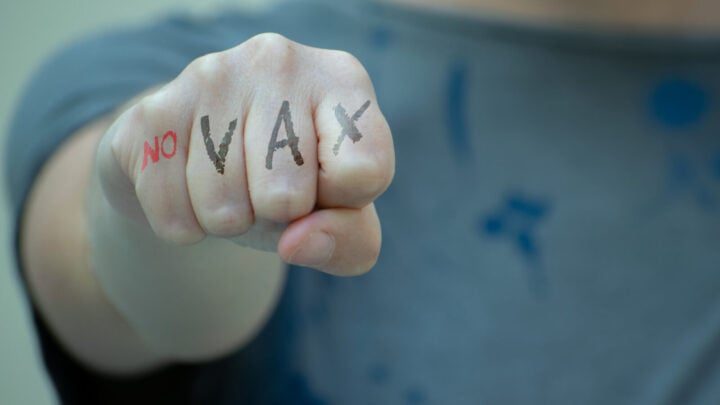 The topic is polarising the nation, but where do you stand? Source: Getty

It’s hard to avoid the subject of vaccines in the current climate, with every conversation with family, friends and even strangers circulating around Covid-19 and inevitably turning to one’s views around vaccinations, with the polarizing topic splitting apart families and friendships.

Just a few months ago Australia made headlines around the world for its hesitancy around vaccinations, when a survey suggested that one-third of us said we wouldn’t be getting the vaccine. Now, the latest Newspoll has shown more promising results, showing that only 11 per cent of adult Australian voters say they will flatly refuse to get jabbed, suggesting that we may be on track to meet the 70 per cent vaccination target by December, which Prime Minister Scott Morrison has heralded as our only hope of getting back to normality.

While it seems there’s no doubt we all want to return to normal – whatever that may look like in a post-pandemic world – the topic of vaccinations has become everyone’s issue as many argue that those who refuse vaccination are putting others at risk, while those opposed say it’s an issue of human rights and free speech.

American actress Jennifer Aniston recently spoke out about her approach to “anti-vax” friends, revealing she had lost a few friends over their views around vaccination. While Aniston did acknowledge that everyone is entitled to their opinion, she said such opinions were based on “fear and propaganda”.

“There’s still a large group of people who are anti-vaxxers or just don’t listen to the facts. It’s a real shame,” she said.

“I’ve just lost a few people in my weekly routine who have refused or did not disclose [whether or not they had been vaccinated], and it was unfortunate. I feel it’s your moral and professional obligation to inform, since we’re not all podded up and being tested every single day.

“It’s tricky because everyone is entitled to their own opinion — but a lot of opinions don’t feel based in anything except fear or propaganda.”

In response to Aniston’s comments and Australia’s slow vaccine rollout which has been dubbed the “stroll out” by the Washington Post, Angela Mollard, a columnist for The Daily Telegraph, penned an opinion piece saying she too was “unfriending” her anti-vax mates.

“We’ve long had an epidemic of ignorance around vaccines but Covid has seen it mutate out of the fringes and into the mainstream,” she wrote.

“Anti-vaxxers used to be hessian-clothed, astrology-guided, barefooted sunseekers in hippy locales but now they’re popping up in my friendship group.

“Four people who I’ve shared meals with and who follow me on Facebook have disclosed they won’t be getting the vaccine, or will be waiting ‘until everyone else has theirs’. These people are not uneducated. One is a businessman, another a store owner and a third, bemusedly, works in the health industry.

“In the past I might’ve tolerated such opinions; rationalised them as the free speech and free choice central to democracy. Not now.

“Like Jennifer Aniston, who this week revealed she’s de-friended those who refuse to get the Covid-19 vaccine, I’m no longer prepared to waste my precious life on those who don’t value theirs or anyone else’s.”

On Monday the country received the good news that the Therapeutic Goods Administration (TGA) approved the use of the Moderna vaccine, bringing our chance of hitting the 70 per cent vaccination rate target a little closer.

Mollard echoed the government’s warning that vaccination was our only way “through” the pandemic but criticised their “incentive” programs, saying survival should be the only incentive needed.

“We are at war with an external threat and our only way through it – not out of it because scientists say there will be no ‘out’ – is to vaccinate,” she wrote.

“We need to take up the jab against this common enemy in the same united way our soldiers fought the Battle of Long Tan and Kokoda.

“Staying alive should be incentive enough. In any case, when freedom passports are given to the vaccinated but withheld from the objectors it’ll be interesting to see how many are still ‘doing their research”’.

Opinions on Jennifer Aniston’s comments were just as split, with many taking to Facebook to share their standpoint.

“Likewise, I will do my best to avoid anyone who is vaccinated…” one said.

“The unvaccinated can carry their own consequences, what others may do is a demonstration of their choice. Time and circumstances will determine outcomes,” another wrote.

While others said if she was vaccinated she shouldn’t worry about those that weren’t with one writing: “If your vaccines work, then why worry about everyone else.”

Would you ever consider cutting ties with someone of opposing views?