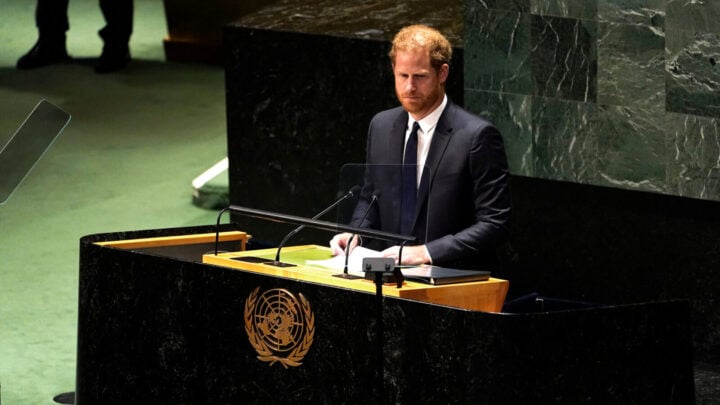 Prince Harry’s keynote speech at the UN General Assembly for Nelson Mandela International Day on July 18, has drawn criticism for his choice to weigh in on controversial political matters in the United States.

Accompanied by his wife, Meghan Markle, Harry delivered his speech “tackling some really big issues” to a mostly empty room.

MANDELA DAY: Prince Harry at UN: “Our world is on fire.” pic.twitter.com/Bf6cG9oxSK

“A lot of people around the world are scratching their heads,” Myers said.

“Poor old Harry, you look at the people who are gathered and there weren’t too many of them in the room – so you can make of that what you will.

“I’m sure a lot of people around the world will be hearing about his speech, maybe even tuned in. He tackled some really big issues, climate change, the weapon of lies and disinformation on the internet.

“He even waded in – which is quite brave for a British prince, to be speaking about constitutional issues in the US – the big Roe versus Wade scandal that is ongoing in the US.

“Listen, a lot of people are wondering why Harry spoke about it. As ever with him, he will divide opinion. I think this is one of those instances.”

Barr questioned whether the Royal expectation of withholding political comment still applied to Harry now that he’s been stripped of his Royal title.

“But is he a member of the royal family anymore? Does it matter?” she asked.

Myers insisted that Harry’s status as a Prince mattered.

“We shouldn’t have a British prince wading into political issues like this. So this is a huge, huge issue in the United States and it will certainly ruffle feathers,” he said.

The Royal commentator criticised the Prince’s speech, noting his touch on climate change was contradictory based on Harry’s travel preferences.

“I’m sure Harry has an awful lot to say but maybe we should all be questioning someone who is talking about climate change and is still riding around in big gas-guzzling motors and flying on private jets. It just doesn’t sit well with the majority of people I don’t think,” Myers said.

Despite Harry reminiscing about Princess Diana meeting Nelson Mandela, Kochie questioned why Harry was invited to speak at the UN’s event.

“Of all the people in the world who were close to Mandela or part of his activism around the world, why choose Prince Harry?” Kochie asked.