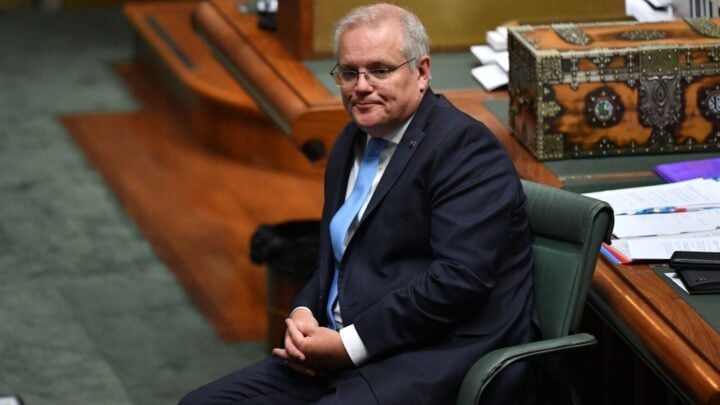 Scott Morrison came under fire earlier this week after he interrupted a female MP. Source: Getty.

Scott Morrison has copped criticism, mockery and now even made international headlines after interrupting a female MP who was responding to a question about what it’s like to be a woman in parliament.

Video of the press conference from Tuesday has circulated widely on social media, it’s even reached the United States and United Kingdom with both The New York Times and Huffington Post UK running stories on how Morrison cut off Minister for Families and Social Services Anne Ruston.

The New York Times reported “it may go down in Australia as the ‘manterruption’ of the year“, while Huffington Post UK, wrote: “Australia’s male PM gave a perfect demonstration of misogyny in politics when he interrupted a female colleague who was talking about … misogyny in politics.”

In the video, a journalist directly addresses Minister Ruston: “Ms Ruston, can I ask you, as a woman in government, your reflections on the culture inside. Has it got better, worse or stayed the same since the bonk ban era?”

Ruston only got about eight words in before Morrison interrupted. “Well Phil, the only thing that I can,” she can be heard saying in the clip before Morrison interjects, “How this ban is referred to I think is quite dismissive of the seriousness of the issue, Phil. And I would ask the media to stop referring to it in that way. We took it very seriously, and I think constantly referring to it in that way dismisses the seriousness of this issue. It’s a very serious issue. Thanks. Anne.”

Ruston then begins again: “Well Phil, obviously I can only reflect on my own experience, since I have been in this place since 2012, and I have to say that I have always felt wholly supported while I have been here.”

The question from the journalist was in response to the ABC’s explosive Four Corners episode which aired on Monday night. The episode looked into Malcolm Turnball’s infamous 2018 “bonk bank”, a ban on sexual relationships betweens ministers and their staff.

Julia Banks, a former Liberal MP, also chimed in, saying: “Standing by the men. Talking over the women. Making international headlines. So Trumpesque.”

Other Twitter users also weighed in, with @BiancaMinnie4 tweeting: “So the first thing #ScottyFromMarketing does is interrupt in order to try and control the message. The PM is very clear about his priorities.”

But Ruston has since come out saying Morrison’s interruption of her was “an entirely appropriate intervention”.