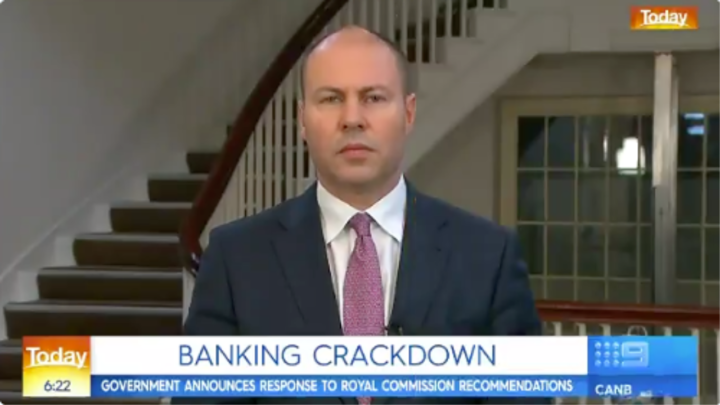 Treasurer Josh Frydenberg has announced the government's plan to implement the recommendations to the banking sector set out by the Royal Commission. Source: Twitter/ The Today Show

The Morrison Government has outlined its long-awaited plan to reform the financial services sector, with a promise to overhaul the four big banks and restore the trust of Australians in the system within a year’s time.

Treasurer Josh Frydenberg has listed the party’s schedule for the next year detailing their plan to address the 54 recommendations directed to the government in the royal commission’s final report. The politician claimed around one third of the government’s commitments will be implemented or have legislation by the end of this year, while close to 90 per cent will be completed by mid 2020 with the remaining introduced by the end of next year.

“The need for change is undeniable and the community expects that the government’s response to the royal commission will be implemented swiftly,” he explained in a statement on Monday. “Implementing the recommendations of the Royal Commission are critical to restoring trust and confidence in Australia’s financial system and part of the Morrison Government’s plan for a stronger economy.”

In order to follow through with these plans, Frydenberg explained the Treasury and Office of Parliamentary Counsel will be provided with an additional $9.3 million which will be added to the $12.1 million provided in this year’s budget. The changes to the industry will be monitored over time with an independent review scheduled for three years’ time to ensure improvement is being felt by Aussie consumers.

However, some in opposition parties have slammed the plan, with the likes of Labor’s Jim Chalmers and One Nation leader Pauline Hanson adding their two cents to the government’s proposed changes to the industry. Taking to social media on Monday, Chalmers hit out at Frydenberg, claiming the timeframe is too long and Australians have suffered already from the delay in reaching this point.

In a series of posts on Twitter, the shadow treasurer described the announcement as “disappointing” for the victims of banking misconduct and claimed the Liberal Party are “dragging their feet” in implementing the recommendations.

Morrison and Frydenberg pretended to care about banking misconduct to get them through the election but since then and until today they’ve barely said peep about it.

“Morrison and Frydenberg pretended to care about banking misconduct to get them through the election but since then and until today they’ve barely said peep about it,” he explained. “They’ve been shamed into today’s announcements six months after they received the final report and only after pressure from @AustralianLabor, the media and the broader community.”

Chalmers added: “We need to see the royal commission recommendations implemented properly and in a timely way so that Australians can have confidence that the rorts and ripoffs uncovered there have been properly dealt with.”

His comments were echoed by Hanson who appeared on the Today show on Monday morning to discuss the topic. The One Nation leader also took aim at the government for its plan and said too much blame is being placed on mortgage brokers in this instance.

“I warn the government, do not go after the mortgage brokers, they are not to blame in all of this,” she explained on the Channel Nine program. “I think a lot of the blame is taken off the eyes of the banking sector and they’ve actually focused on mortgage brokers. A lot needs to be done to clean up the banking sector to gain the confidence from the people but I hope they really listen to the public about this with the complaints they have against the banks.”

“I’ll warn the government, do not go after the mortgage brokers. They are not to blame in all of this.” @PaulineHansonOz #9Today pic.twitter.com/yPvKx3o6Wm

“We are glad that the government has committed to move fast on key reforms like stronger professional obligations for mortgage brokers,”
Choice Chief Executive Officer Alan Kirkland said.“The faster these reforms are legislated, the sooner consumers will be better protected from the practices revealed at the Royal Commission.”

However, he did warn that is could be a tricky road ahead with industry lobbyists already fighting change. Kirkland advised the government to stand strong in its decisions and not back down to pressure.

“We’ve seen industry lobbyists try and water down every single reform to their sector,” he added. “We saw it just this weekend with financial advice groups pushing back against new bare-minimum education standards for their profession.

“Commissioner Hayne warned that industry groups would attempt to undermine the reforms he recommended by arguing for loopholes or exemptions. The Federal Government will need to stand strong against industry pressure to ensure that the Royal Commission recommendations are implemented effectively.”

Frydenberg’s announcement comes one day after the Australian Securities and Investments Commission (ASIC) revealed they would be taking a harsher stance when it comes to the behaviour of banks and financial institutions from now on, with ASIC Deputy Chair Daniel Crennan QC telling The Australian they will be taking legal action against the Big Four, along with AMP and Macquarie, within a matter of weeks.

ASIC was scrutinised during the Royal Commission into Misconduct in the Banking, Superannuation and Financial Services Industry, copping flak for not pursuing enough cases through the courts. Issuing their biannual enforcement report on Sunday though, Crennan vowed to “increase the number of analysts, investigators and lawyers in our ranks”, thanks to an increased federal funding of $404 million.

He continued: “Many of the tools are now in place to deliver a stronger legislative, enforcement and regulatory framework with tougher penalties. The government has proposed additional new laws to further strengthen ASIC’s enforcement powers.”