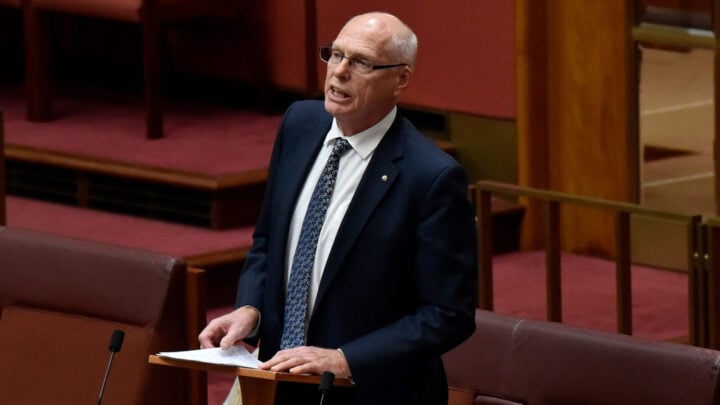 A month after the shock announcement that he was battling an “aggressive” form of cancer, Liberal Senator Jim Molan has revealed that he has been diagnosed with prostate cancer, and will begin chemotherapy in coming weeks.

In an interview with Sky News host Paul Murray on Tuesday, the 71-year-old explained that after a fortnight of testing it was finally confirmed he was battling “aggressive” prostate cancer.

The senator, who is also a retired major general of the Australian Army, initially took leave at the beginning of April to undergo treatment. He told Murray that he was now due to undergo his final radiation treatment.

Murray asked the senator how he was feeling, before commenting, “geez, you look good!” Molan laughed before replying that it was “trick photography”. “I’m doing okay mate,” Molan said. “I have one more radiation treatment to go, which is tomorrow, [then] two weeks after that I start chemo. Everything’s going as it should go. All I’ve got to do now is go through it.”

Molan went on to describe the diagnosis process as an “interesting journey” as he underwent a fortnight of daily testing to identify where the cancer was located.

The senator said the shock diagnosis had affected his family more than himself, as he said he’d been preparing for his own death since his days as a soldier. “As I say to people, I joined the army when I was 17 years old, and I’ve been addressing my own demise in various ways ever since that time, and preparing myself for it, as a good soldier should.

“Because I’m a bit of a tough guy, I guess that I transferred all of those things back into myself and the impact of this just reminded me — and I shouldn’t have needed to be reminded of it — of the interaction between myself and Anne (my wife) and my children. I’m fairly level-headed, but what I forgot was the impact on everyone else. The only time I really got emotional was when I thought of them.

“In the first two weeks, before they’d actually defined what sort of cancer it was, they were pretty tough periods of time and it was testing every day. My cancer was prostate cancer and as people say to me, if you’re going to have cancer, have prostate cancer, because it can be managed.”

Molan said he felt incredibly thankful for the “fabulous” support and the medical care he’d received so far. “I sit each day now as I’m waiting to be treated in waiting rooms, in the magnificent cancer facilities in the ACT and I see people who are either as unfortunate as I am, or much worse than I am, ” he said. “And I see every day, coming through the big swinging doors the staff that work in those places, who smile and who make we as patients feel comfortable.

“The worst thing in the world would be if the Prime Minister called an election and I wasn’t there. Let’s hope he doesn’t!

“I’ve got a lot to be thankful for. The support I’ve received from lots and lots of people including many in the opposition has just been fabulous and we’ll get through this and I shall be back.”

Have you ever experienced the dreadful wait for medical results?