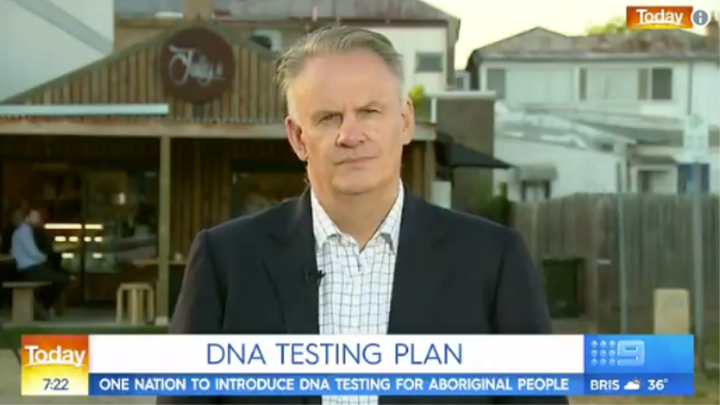 One Nation’s Mark Latham sparked controversy on Tuesday morning when he addressed the party’s plans to enforce DNA testing on any person claiming Aboriginal heritage for government assistance.

Speaking on Today, the NSW One Nation candidate announced the proposed plan that would see only those with 25 per cent indigenous ancestry gain financial support from Centrelink.

Detailing the reasoning behind the party’s decision, Latham claimed the policy would weed out “the blonde-haired, blue-eyed Aboriginal” and stop people who are supposedly rorting the system.

“If the technology exists for the DNA ancestry testing, let’s use it,” he told hosts on the Nine Network morning program.

“Let’s find out the heritage of the people applying for indigenous programs and obviously if they have got very little or have got none, they are trying to rort the system, that’s no good.”

.@RealMarkLatham has revealed One Nation's plan to force anyone claiming ancestral ancestry to prove it with DNA testing. The plan would "weed out welfare rorters" because "a single dollar of wasted welfare money is a problem". #9Today pic.twitter.com/jknaHNzxs4

The politician continued by claiming those with “genuine indigenous identity” deserve the payments and money shouldn’t be “wasted” on those who do not have a certain amount of ancestral DNA.

“We should be respecting genuine indigenous identity and getting the money to the people in need who have got the genuine Aboriginal background,” he said. “A single dollar of wasted welfare money is a problem. I mean, taxpayers work very, very hard.”

Latham added: “I’m saying if you want to qualify for a special program and support, let’s see the evidence, scientific evidence that shows that you are fair dinkum”.

The One Nation candidate did not offer any evidence that people are falsely claiming aboriginal heritage for Centrelink payments.

His comments garnered much attention online with Aussies adding their two cents to the discussion.

“What a disrespectful suggestion,” one person wrote. “Mark, what do you say about the taxpayers dollars being rorted by wealthy white politicians on a pension?”

Others, however, agreed with the politician.

Another added: “We are all 99.9 per cent genetically similar. If a group is going to benefit from their different 0.1 per cent, then why is it offensive to provide evidence? The 1/16th rule needs considering. I am 1/16th French and 1/16th Irish but I would not go to those countries and claim to be one of them.”

What are your thoughts on this? Do you agree with Mark Latham? Or do you think those claiming Aboriginal heritage should not have to prove their ancestry?