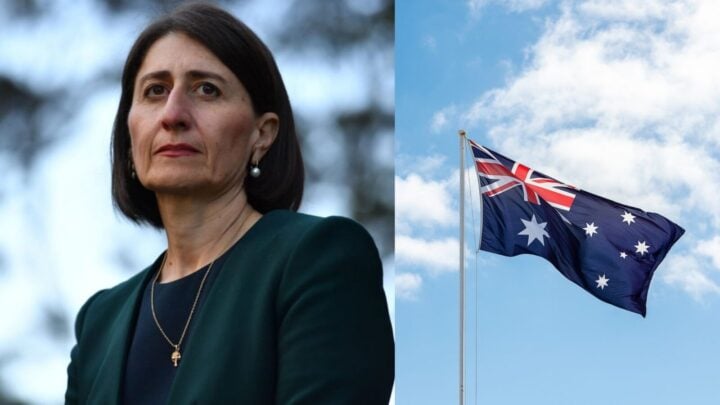 The NSW premier has weighed in on the national anthem debate, suggesting a single word lyric change to be "more inclusive". Source: Getty.

New South Wales Premier Gladys Berejiklian has weighed in on the national anthem debate by saying a lyric change to ‘Advance Australia Fair’ could make it more inclusive to Australia’s First Nation’s people.

The premier appeared on Sunrise on Wednesday morning to suggest that a slight change of the lyrics from “we are young and free” to “we are one and free” could create a better way of acknowledging Australia’s Indigenous history.

“We have a very proud Indigenous culture of tens of thousands of years on this continent, so I guess to say ‘we are young and free’ ignores that,” she said.

Berejiklian went on to say that she “feels hurt” for the people who don’t feel as though the anthem includes them and added that, if her change were taken on board, it wouldn’t the first time the lyrics to the national anthem were altered to be more inclusive.

She described the change as “small and symbolic” adding that “every step matters, respect and dignity matters a lot and goes a long way.” Meanwhile, Shadow Minister for Indigenous Affairs Linda Burney welcomed the premier’s suggestion saying that it would be a significant discussion to be had.

The suggestion comes after the NRL recently backflipped on its decision to ban the national anthem from the State of Origin. Prior to Game One, the league announced ‘Advance Australia Fair’ wouldn’t be played before the game, as is tradition, following a silent protest from several Indigenous players last year.

However, just hours after the announcement, backlash from fans, including a personal phone call from Prime Minister Scott Morrison, caused the Australian Rugby League Commission to reverse its decision and confirm the anthem would in fact be played before each game between the two states.

The NRL chief executive Andrew Abdo said the decision was not “politically motivated” adding that the league was just “listening to the public”.

“This was never intended to create a divisive issue for us, particularly in a year where we have done so much together to fight through Covid-19,” he said. “Therefore as soon as this did become a divisive issue, the decision the commission made was to revert to playing the national anthem for State of Origin.”

Do you think the anthem lyrics should be changed?