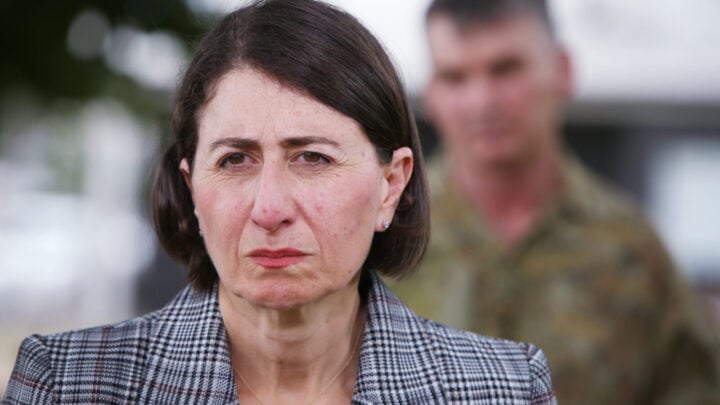 New South Wales Premier Gladys Berejiklian has been slammed for failing to self-isolate while waiting for her Covid-19 test result last week, with many calling her “arrogant”.

The premier took a precautionary Covid-19 test last Tuesday after she started to lose her voice. However, instead of self-isolating while waiting to receive her results, as per NSW Health guidelines, Gladys reportedly attended a number of meetings at parliament.

Now in a heated exchange with ABC’s Lisa Miller this morning, the premier has defended her actions, saying she didn’t have symptoms.

“I didn’t have symptoms,” she revealed. “But having said that, I’m judged accordingly and I have to accept that, and I should have probably done that (closed the door and isolated).”

Miller then asked the premier whether she would consider changing the NSW Health guidelines, to which Gladys responded with: “Absolutely not. Why would I change the guidelines?”

“Because you’re not following them?” Miller said, before the premier reiterated she didn’t have any symptoms and had simply lost her voice.

“But you took a test and didn’t self-isolate, and the guidelines say if you take a test you have to isolate,” the ABC host continued.

“I accept that,” Gladys said.

“Yeah, I accept that in hindsight, I should have kept my doors shut for the 90 minutes or two hours while I was waiting for the result… but it was only because I was tired and I was losing my voice.”

NSW Premier on not isolating after taking a COVID-19 test:@LisaMillar: You do accept that you didn’t follow your own guidelines?@GladysB: Yeah, I accept that in hindsight, I should have kept my doors shut for the 90 minutes or two hours while I was waiting for the result. pic.twitter.com/WuBJvAwG3p

Many people have since taken to social media to slam the premier, with Twitter user @blolop_ saying: “This is poor. You are the premier. You lead by example. Going against the offical advice of NSW Health could endanger the health of others. Many have lost work & sick leave because they’ve had to isolate until they received their results. You are not above the citizens of NSW.”

Meanwhile @backupbear commented: “The example set by a premier during a pandemic while governments have been frantically trying to get people to isolate while waiting for results is utterly reprehensible, and would apply to any premier of any political persuasion. Her position is untenable.”

And @M0rtaldude added: “Just arrogant, no apology for doing the wrong thing. She could have been asymptomatic for all she knew!”

However, some came to her defence with @DavisCathetine writing: “She is the premier, give her some respect. She took the test had a quick response. Just doing the right thing. She has a job to do.”

It comes as Queensland Premier Annastacia Palaszczuk announced the sunshine state will be reopening its borders to NSW on December 1.

“Dr Young is now satisfied that they have reached the over-28 days, so can I say to New South Wales: we welcome you to Queensland from 1 December,” Palaszczuk said in a press conference Tuesday morning.

What are your thoughts on this? Do you think she's in the wrong?