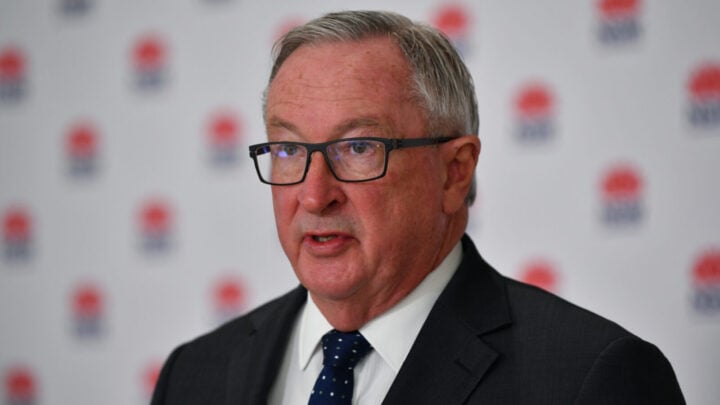 New South Wales’ Delta outbreak is getting worse by the day, and following news of more ‘freedom’ protests planned for this weekend, the state’s Health Minister Brad Hazzard has had enough and lashed out at “selfish” anti-vaxxers.

Greater Sydney recorded 239 cases of Covid-19 on Thursday, and 170 cases on Friday with the region coming to the end of its fifth week of lockdown.

On Thursday, Hazzard slammed residents who are rejecting the science behind Covid-19 vaccines, saying they were putting the community at risk and telling them to “wake up”. He encouraged all Sydneysiders, to come forward to get either the AstraZeneca or Pfizer vaccine.

“The community needs to understand that the decisions are taken as best as possible on the basis of evidence and science to keep us safe,” he said.

“We had a question from a journalist here before about some people not wanting to take vaccines. My message to them is you are being extremely selfish.

“If you think you cannot have a vaccine just because you don’t want to have a vaccine, well you should think about what you are doing to your family and to the community.”

Hazzard wasn’t done there, he also had a strong message about the risk anti-vaxxers were placing on frontline medical staff, telling them to “wake up”.

“When you get sick, you are going to expect to come into hospital and get paid for by taxpayers,” he said. “It is time for those who actually think that way to wake up.”

The comments topped off a tumultuous week for the health minister, who has faced criticism for his handling of the Covid-19 crisis gripping Sydney. On Friday morning, 2GB host Ben Fordham called for Hazzard’s resignation, branding the city’s lockdown process “a gigantic stuff up” and calling for an inquiry into the government’s management of the outbreak.

“When the outbreak started in Bondi it should have set off alarm bells,” he said. “We just watched it.”

“Brad Hazzard is yet to take responsibility for this mistake, he’s too busy arguing with journalists at press conferences. Even champion teams lose big games, and boy have we lost this one, and when you lose a game, there’s got to be a post-match review.

“We need someone to admit their mistakes. Brad Hazzard does not seem capable of saying sorry. You can’t keep hiding behind the health advice, Mr Hazzard. Read the room and resign.”

Mal Lanyon, NSW Police deputy commissioner, said police were monitoring social media groups ahead of the weekend and had intelligence that people were considering lockdown protests again following last Saturday’s violent protest in Sydney. Lanyon warned they would not be tolerated.

“We’re certainly in possession of information that people are considering a follow-up protest to that conducted last Saturday, can I say to you that we have deployed significant intelligence assets and other police methodology has been deployed to gather as much information about those activities as possible,” he said.

“Police have well and truly planned for any eventuality … should there be a protest this weekend, there will be sufficient numbers to take appropriate action right across the board. We will not tolerate those types of actions.”

Do you agree with Brad Hazzard's comments?