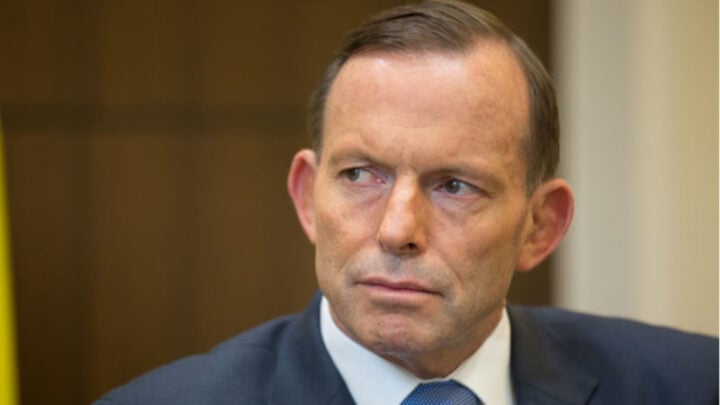 The former PM is expected to be appointed as a trade envoy to the British government. Source: Shutterstock.

It was revealed this week that former Prime Minister Tony Abbott was expected to be hired as a trade envoy for the UK government, as Prime Minister Boris Johnson continues to establish a post-Brexit Britain. However Abbott was slated on British television overnight as a leading television journalist questioned why a “homophobic misogynist” was being considered for the job.

“Is Tony Abbott the right person to represent us – even if he’s a homophobic misogynist?” Sky News reporter Kay Burley asked UK Health Secretary Matt Hancock on Thursday. However Hancock hit back in defence of the former Aussie leader, claiming his expertise in trade would be invaluable to the UK.

“He is also an expert in trade,” Hancock said. “We need to have the best experts in the world … and as the former prime minister of Australia obviously Mr Abbott has got a huge amount of experience.”

Burley isn’t the only person to have questioned Abbott’s appointment however, as the Labour Party’s trade spokeswoman Emily Thornberry described the former member for Warringah as an “offensive, leering, cantankerous, climate-change-denying, Trump-worshipping misogynist’’.

Meanwhile, as the country struggles to see a way out of the ongoing pandemic, the Grattan Institute has recommended that Australia should be aiming for zero active cases of Covid-19, describing it as “short-term pain for long-term gain”. “Getting to zero means life can return closer to normal with a substantially reduced risk of outbreaks,” a new report published by the think tank states.

Dr Stephen Duckett says the country should “finish the job” after coming so far. “Opening up too early, while coronavirus is still in the community, runs the risk of future outbreaks, reimposed lockdowns, renewed economic disruption, and more deaths,” he wrote. “Allowing the virus to run free, as suggested by some commentators and business advocates, would be deadly.”

The news comes ahead of the latest meeting of the National Cabinet this morning, where the issue of domestic borders is no doubt set to dominate the discussion. Prime Minister Scott Morrison has previously said he’d like to see the country reopened to domestic travellers before Christmas, despite the premiers of Queensland and WA standing firm on their commitment to keeping their borders closed.

Earlier this week Queensland Premier Annastacia Palaszczuk doubled down on her dedication to keeping the Sunshine State’s borders closed until there are zero cases of community-acquired coronavirus in New South Wales and Victoria. “I think we’re going to continue to see restrictions in Victoria up until Christmas time,” she said on Monday. “That’s very unfortunate for people living there but it’s a serious situation.”

While WA Premier Mark McGowan said his government would not set “any timetables” on when they would reopen their borders.