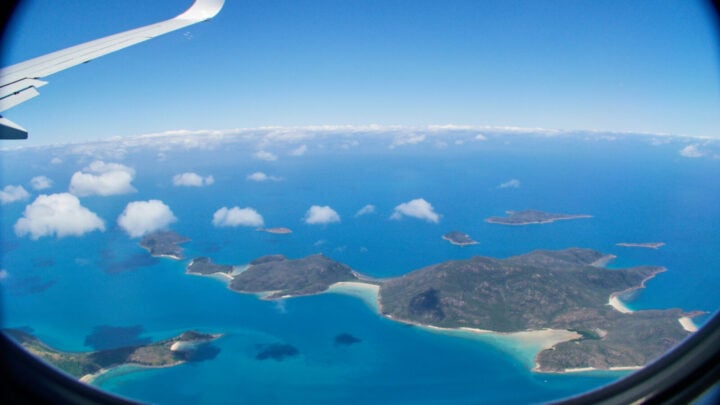 The Whitsundays are one of 13 destinations included in the governments half-price flight initiative. Source: Getty

Half price flights may sound too good to be true, but thanks to a new Federal Government initiative Australians will soon be jetting off around the country for a fraction of the usual cost.

The Morrison Government unveiled the $1.2 billion package on Thursday morning to support the local tourism industry and “aviation reliant” destinations, which have been hit hard by the pandemic and will face the effects of the end of the JobKeeper program later this month.

Return flights to eligible locations will receive a 50 per cent discount between April 1 and July 31, which includes the Easter and winter school holidays. The initiative aims to get Australians who usually book international trips to Bali or further abroad for the winter, to spend their money locally and support the regions instead.

The government suspects they’ll discount nearly 800,000 airline tickets to destinations including the Gold Coast, Cairns, the Whitsundays region, the Sunshine Coast, the Lasseter region which includes Uluru, Alice Springs, Launceston, Devonport, Burnie, Broome, Avalon, Merimbula and Kangaroo Island. More locations and routes may also be included later in the year, depending on demand.

There are expected to be about 46,000 half-price tickets available per week, and to book a ticket people simply have to log on to major airline websites, including Qantas, Jetstar and Virgin, from April 1. Other airlines may be available at the time, but they must have been servicing the route for at least two years.

Prime Minister Scott Morrison said the package was “our ticket to recovery,” and would drive money into tourist areas that are suffering due to the economic impacts of the coronavirus.

“This package will take more tourists to our hotels and cafes, taking tours and exploring our backyard,” he said. “Our tourism businesses don’t want to rely on government support forever. That means more jobs and investment for the tourism and aviation sectors as Australia heads towards winning our fight against Covid-19 and the restrictions that have hurt so many businesses.”

“The Government support announced to get airlines flying again is a fabulous outcome for our travel-loving customers,” she said. “The pent up demand for travel is very real, yet people are always looking for a great deal, so this is sure to be a massive boom for all the regions involved.  In fact the Travel at 60 phones are already running off the hook with questions from our customers asking how they can secure a great hotel deal to go with the airfares that are sure to be on offer, so make sure you get organised early by talking to your travel agent about your plans as soon as possible.”

The government also announced it will be financially supporting Australia’s two international passenger airlines, Qantas and Virgin, keeping 8,600 aviation workers employed to ensure they maintain “a set level of international flight readiness”. The assistance will run from April to October hoping to ready the airlines for when international travel is back on the cards.

While the package seems like a great excuse to dust off the suitcase, Shadow Minister for Tourism Don Farrell said the “support is long overdue and will be too late for many”.

“The Morrison Government is asking cash-strapped families to spend their money on saving Australia’s tourism industry when it isn’t prepared to do the same thing itself,” he said.

Prior to the announcement, Labor has been ramping up calls for the government to extend JobKeeper to specific industries including tourism and aviation, warning of the potential for widespread job losses.

Discounted flight routes (prices announced April 1)
The government warns these may change depending on airline negotiations and demand.

Where will you be going with your half-price flight?