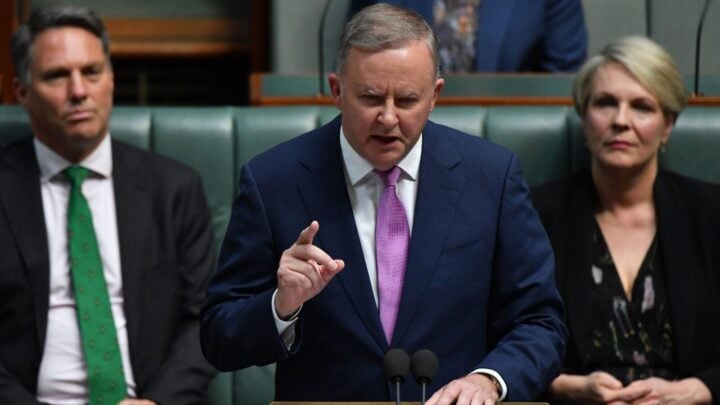 Labor focussed on childcare and energy in the Budget reply. Source: Getty.

Anthony Albanese delivered his Budget 2020 reply speech on Thursday night and used the opportunity to launch Labor’s first major policy promises since the election loss in 2019. He focussed mainly on making billion dollar commitments to working on both Australia’s childcare and energy systems.

The leader of the opposition announced his $6.2 billion plan to remove the Child Care Subsidy (CCS) cap that currently limits annual payments to $10,560 for families earning more than $189,390 per year. Additionally, Labor will increase the maximum CCS rate from 85 per cent to 90 per cent meaning families with a combined income of less than $80,000 would pay 10 per cent of their childcare costs.

Albanese said the current system was stopping women from returning to full time work after having children as they had to pay more in order to work after reaching the cap adding that for some, it was simply not worth working more than three days a week. He said that rebuilding the childcare system would “turbocharge productivity and get Australia working again”.

In the long-term, the Labor government would also be working towards investigating a 90 per cent universal CCS that would see no family, no matter the income, pay more than 10 per cent of their child care costs. In response to the plan, Liberal Senator Jane Hume said universal childcare could have perverse outcomes.

“People overbook it, which makes the positions less accessible,” she said. “By removing the cap, childcare providers cost shift … it’s a free for all.”

The Budget reply also touched on Labor’s promises to modernise the nation’s electricity grid to better integrate the capacity to transmit renewable energy. The $20 billion, six year plan was to establish a corporation to improve the current grid and build electricity transmission infrastructure to prepare the nation for renewable energy if Labor were to win the next election.

“Australia’s electricity network was designed for a different century,” he said. “The current network takes no account of the rise of renewables as the cheapest new energy source, and doesn’t help link these new sources up to the national grid. By using the Commonwealth’s ability to borrow at lower interest rates, it will be done at the lowest possible cost.”

Albanese added that making these improvements to the grid would also create thousands of jobs and generate a flow of $40 billion in benefits.

The ALP leader started his speech by deconstructing the movements of the Coalition adding that the Morrison government’s Federal Budget that was handed to the public on Tuesday night had failed to map out a recovery that strengthened the country, rebuilt the economy and made society fairer. Albanese focussed on those who were “left behind” in the budget including women, workers aged over 35, the unemployed and older Australians.

Do you agree with Labor's plans? Or do you think the Budget was spot on?