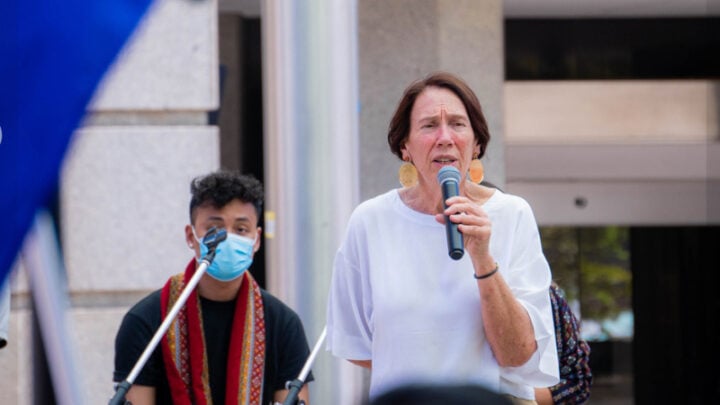 The suggestion quickly drew anger, particularly Kennedy MP Bob Katter who was vocal in his criticism of the proposal. Source: Facebook/

Mere days after Pauline Hanson stormed out of the Senate in protest of the Acknowledgement of Country ceremony, the same Senate President she interrupted has called for the 121-year-old tradition of reading the Lord’s Prayer at each sitting to be scrapped.

Despite the long-standing tradition being practiced since 1901, Sue Lines told The Australian, “personally I would like to see them gone”.

“Personally I would like to see them gone but again it’s not something I can decree. It’s a view of the Senate.”

Lines plans to address the matter at the next Senate Standing Committee on Procedure.

The suggestion quickly drew anger from Canberra, particularly Kennedy MP Bob Katter who was vocal in his criticism of the proposal.

“Is it an unreasonable thing to quote from a book that more than half the population is committed to? In Australia it is,” he said.

Anger was not just contained to Canberra with Australians across the nation slamming Lines for her proposal, suggesting “our Australian traditions are being eroded”.

With the reluctance of an Australian Prime Minister to stand in front of the national flag, and the daily reading of The Lord’s Prayer in The Senate now under threat, our country is sliding rapidly down a very slippery slope.

Every day in every way our Australian traditions are being eroded. Sue Lines is entitled to her likes and dislikes, but leave our traditions alone.

Despite many condemning the suggestion, just as many supported Lines’ proposal. With several argueing that religion and politics should remain separate.

Religion is for Sundays not schools and government!

It has no place in Parliament.

I say that prayer, but I don’t think it’s necessary or appropriate for non-Christians to say, or even sit quietly through. We need to either ditch a prayer altogether, or rotate through different faith traditions…

In addition to the Lord’s Prayer being recited the Senate also practices an Acknowledgment of Country ceremony, a tradition Senator Pauline Hanson voiced her objections to days earlier.

The One Nation leader came under fire after she stormed out of the Senate on Wednesday, July 27 during the Acknowledgment of Country ceremony.

While recognising the Ngunnawal and Ngambri peoples as the traditional custodians of the Canberra region, Hanson interrupted claiming she would not be part of the ceremony.

The outspoken Hanson later told Australian Associated Press that she had been “feeling this way for a long time”.