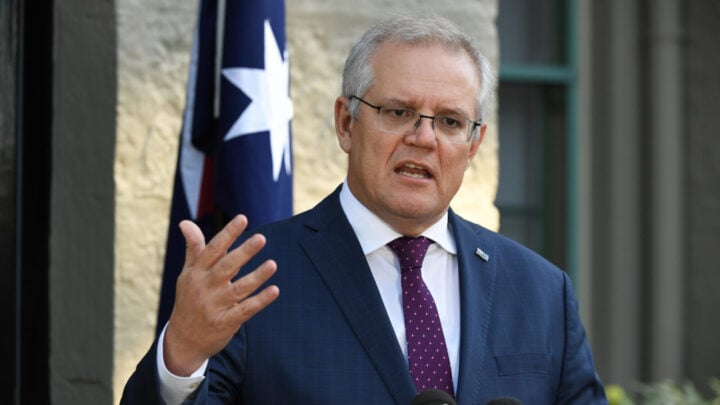 The PM has unveiled plans to introduce lockdown support payments for all states. Source: Getty

Following another day of Covid-19 chaos across the country, Prime Minister Scott Morrison has announced the government will be looking to introduce individual and business support payments for states and territories subject to lockdowns in future outbreaks.

On Thursday afternoon, Morrison said the National Cabinet will meet again on Friday where he will propose new financial supports for all states.

“I will be putting to National Cabinet tomorrow, after considering this with the National Security Committee today… a new — what we think is more simple and streamlined — set of financial supports for states and territories going forward,” he said.

Morrison stressed they were still “prospective changes”, but from what the PM said during the press conference, the majority of things announced for New South Wales earlier this week, are set to be proposed for all states and territories in the case of lockdowns. The changes include waived assets tests, business support and a payment of $600 or $375 to those who are unable to work.

If introduced, the relief package will fast-track emergency Covid-19 payments of $600 and $375 from the second week of a lockdown, rather than four weeks in. Another payment would also be offered if a lockdown is extended.

The liquid assets tests, which previously meant anyone with $10,000 in savings or other liquid assets were ineligible, will also be waived under the new plan.

For businesses, the payments announced for NSW yesterday will be made available after the second week of a lockdown. Those which have a turnover between $75,000 and $50 million and lose more than 30 per cent in the first fortnight of a lockdown will be eligible for up to $10,000 weekly payments.

“Payments for a COVID support payment would still be paid in the second week of a pandemic, they would be paid basically on an arrears basis on that first seven days,” Morrison said.

“Secondly, the liquid assets test will be waived from the outset.

“Thirdly, the payment that will be made will be at that December quarter JobKeeper figure for last year, which is the payment that in New South Wales they’re about to go into, literally from tomorrow, for those LGAs that I mentioned before. Payments of the $600 and $375 will be the December quarter. Same rules, more than 20 hours, eight to 20 hours, over the course of that first week, and onward from there.

“At the end of 14 days, we would be providing to all states and territories the same arrangements that we are entering into now with the New South Wales government, for business. To remind you about those arrangements, that is if you had your turnover reduced by more than 30 per cent, you would have for businesses between $75,000 annual turnover to $50 million annual turnover, you would have 40 per cent of your payroll made in a payment with a minimum payment of $1,500 and a maximum payment of $10,000. That would be done based on that first two weeks of any possible lockdown.”

The news comes as Victorian Premier Dan Andrews announced the state will go into a five-day state-wide lockdown from midnight on Thursday until midnight Tuesday. The premier confirmed the state has now recorded 18 new cases and said the announcement came with a “heavy heart”.

“We would prefer this had not come to our state. We’d prefer we didn’t have to deal with these issues but this is so infectious,” he said. “This is such a challenge that we must do this. You only get one chance to go hard and go fast. If you wait, if you hesitate, if you doubt, then you will always be looking back wishing you had done more earlier. I am not prepared to avoid a five-day lockdown now only to find ourselves in a five-week or a five-month lockdown.”

Opposition Leader Michael O’Brien says lockdowns need to remain a last resort and should not be considered with so few cases.

“We can’t keep living like this, we can’t keep going into lockdown every time we get 10 or 12 cases in the community,” he said. “When the Premier returned from work, he and national cabinet agreed lockdowns should be a last resort.”

Meanwhile, in Queensland, the state recorded three new local cases and extended restrictions which will see 11 local government areas in the state continue wearing masks for another week.

In New South Wales, greater Sydney is preparing for its fourth week of lockdown with a multibillion-dollar Covid assistance package announced by the federal and New South Wales governments.

In South Australia, concerns are rising about transmissions in Victoria, Queensland and New South Wales, with the state set to introduce heightened internal restrictions, and tighten some of its borders. From midnight tonight, people coming to the state from Melbourne, Geelong and Bacchus Marsh will need to quarantine for two weeks. While anyone coming from other parts of Victoria will need to undergo testing on days one, five and 13, but will not have to isolate once they get their first test result.

Where are you? Will you be affected by a lockdown?