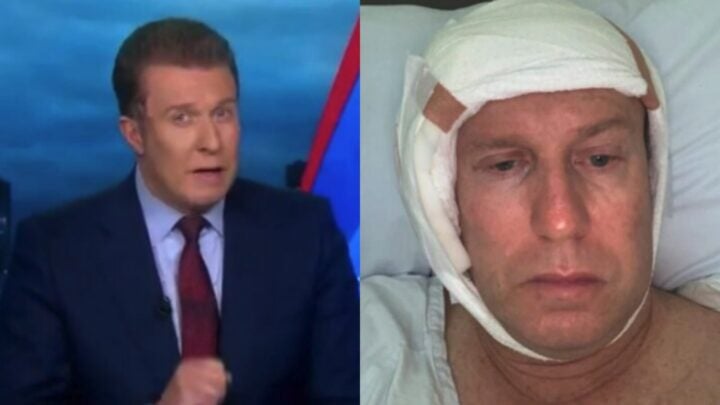 It’s been a rough week for Peter Overton, who had a melanoma removed last Monday, but the 9News Sydney newsreader was back on television Sunday night, showing off his scar while delivering a stern warning to viewers back at home.

Jessica Rowe’s news anchor husband underwent surgery last Monday to remove a melanoma after his dermatologist noticed a change in a mole under his hairline. At the time, he posted a confronting post-surgery photo of himself.

Now, the 54-year-old has given viewers back at home a close-up look of his scar. “The mole was on my right temple, just under the hairline,” Peter can be heard saying in a video, which has since been shared on 9News Sydney’s Twitter page, while turning his head to one side.

“The incision taking out a margin of flesh around the melanoma in case cancerous spores may have spread. This is where it was, and as you can see, it is healing very well.”

Peter went on to say he was “one of the lucky ones” as he warned others to get checked. “But that can be the outcome for almost anyone if a melanoma is discovered early enough,” he said.

Peter Overton discusses an issue close to home this evening.

It’s a warning on just how vital early detection of skin cancer can be. #9News | Nightly at 6.00pm pic.twitter.com/AvjVXytSdI

It comes just a few days after the newsreader shared a gruesome health update with 2GB’s Deb Knight. At the time Peter told the radio host he’s “okay” but “a little battered and bruised”.

“It looks like someone’s punched me, it looks like I’ve been glassed and stitched back together,” he said.

Speaking about the procedure, Peter continued: “They have to cut a huge section and that’s been the most confronting thing. When Jessica cut off all the bandages yesterday when I was allowed to remove all that headwear, it was quite a shock to see the extent of the stitching and the flaps of skin they had to put over.”

Have you been following this story? Have you had a melanoma removed before?