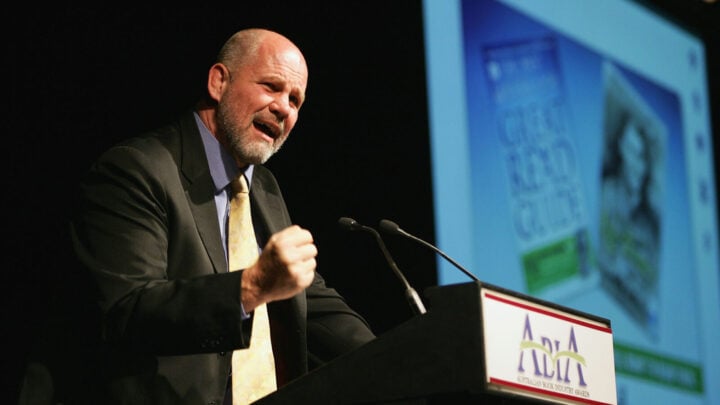 Australian author and journalist Peter FitzSimons has reshared a controversial redesign of the Australian flag, with the Union Jack removed.

The proposed design, posted by a Twitter user, features a depiction of the original Australian flag without the Union Jack, and has an inset of the black, red, and yellow Aboriginal flag in the top left corner.

This would at least be a step in the right direction pic.twitter.com/zFdZGZTPxQ

Peter is a former national representative rugby player and has been the Chair of the Australian Republic Movement for the last seven years.

He is involved with multiple community organizations and remains a popular sports columnist in Australian media.

“This would at least be a step in the right direction”, FitzSimons post shared.

“Like the republic – though they are not separate issues – changing the flag is a matter of political will – not money,” he wrote on Tuesday.

Users took to social media to respond to FitzSimons’s bold post, with many calling out potential issues with the proposed change.

One user regarded the design as ‘hideously ugly’, saying:

One user even pointed out that the proposed design mimicked that of which Sam Neil wore on his uniform in his 1997 movie Even Horizon.

Ah yes I am indeed a fan of the film Event Horizon. pic.twitter.com/t3Dtqyxrzf

Since 2015, Ausflag has been accepting proposed redesigns of the Australian flag from the general public, many having received thousands of votes.

Currently, the most popular design incorporates the original southern cross-section of the flag, with a yellow and green stripe added across the bottom.

Ausflag has also appealed to WA politicians, requesting their support in becoming the first state to drop the emblematic link to the UK, however, the WA government has dismissed the proposal.

Ausflag was first established in 1981 and is a non-profit organisation working towards securing the “popular support of the Australian people for the adoption of an Australian flag, anthem, and colours.

“All current state flags are similar in appearance and difficult to distinguish from one another”, Ausflag wrote.

“They are dull and uninspiring – the people of WA deserve better”.

WA businesswoman, Janet Holmes a Court, stated, “We are one of the most multicultural societies in the world”.

“The Union Jack doesn’t represent that, nor does it reflect our Indigenous history”, she said.

She is pushing for the adoption of a new proposed flag, featuring a primarily yellow and black design with a swan positioned on the right section of the flag, and the southern cross on the left.

The proposed flag independent from the UK (no more Union Jack) for my home state of Western Australia. pic.twitter.com/LqGEkkGzXN

“I don’t think we need a symbol of colonization on our flag.”

As it remains, the Australian flag will continue to exist as it is, pending the possibility of future changes to its design.

What do you think of the proposed design?