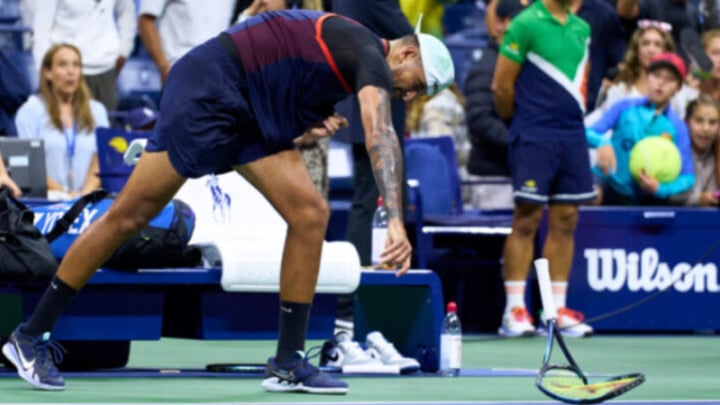 Nick Kyrgios has offered up an explanation as to the reasoning behind his most recent on court outburst. Source: Getty Images.

Australian tennis star, Nick Kyrgios, has opened up about his infamous on court meltdown following his quarterfinal loss to Karen Khachanov at the US Open earlier this year.

Despite an impressive run at the US Open, Kyrgios’ dream of a grand slam victory came to an end on Wednesday, September 7 following a five-set quarterfinal loss Khachanov.

In the gruelling four-hour long match, Khachanov secured a 7-5 4-6 7-5 6-7(3) 6-4 victory over Kyrgios, dashing the 27-year-old’s chances of becoming the first Australians to reach the semi-final since Lleyton Hewitt 17 years ago.

Hats off to @NickKyrgios on an incredible tournament and so many exciting matches.

See you next year. pic.twitter.com/0PeKHmWwwd

After congratulating his opponent for his efforts, Kyrgios was spotted smashing two tennis racquets into the court in wild scenes that left the fans and the tennis community shocked.

Months on from the incident, Kyrgios has offered an explanation as to the reasoning behind his outburst during a recent interview with June Podcast.

”Oh, he doesn’t care, he’s such a brat’ but it’s like how much I cared. People don’t understand like if I won that match that’s another 400 grand. Would someone on the street like, here’s 400 grand – heads or tails – if you got that wrong, would you not be pissed off?

“I just lost in four hours at 2am and for that amount of money. For the achievement of pushing to potentially win a Grand Slam, to bring it home to Australia, because I know how much this nation wants a Grand Slam.

“And I’ve been the closest male tennis player for the last decade to get close to one and all I get is negativity. And I’m just like, I’m frustrated because I didn’t win one for you idiots. And I had to let it out.”

The current World No. 22 touched on the matter previously during a recent question and answer session on social media, in which one fan queried whether Kyrgios feels any regret for his “behaviour on the court”.

In typical Kyrgios fashion, the sports star shot down any suggestion he should feel remorse for his recent outbursts while turning the question on those asking and queried whether people understand what it feels like to compete with “millions of dollars at stake”.

“Making it entertaining? Not being in the box like the rest of you? Winning majority of the time? Being Top 20 in the world? Nah, I love it,” he replied.

“Because my whole life I’ve been ice cold under it, so I expect better from myself. Also because there is millions of dollars at stake. Do you know what that feels like?”

Despite Kyrgios viewing the outburst as justified, Kyrgios was still chided by the tennis community for his on court behaviour at the time.

Former Australia professional tennis player and current sports broadcaster Todd Woodbridge was among the first to call out Kyrgios for his post-match tantrum.