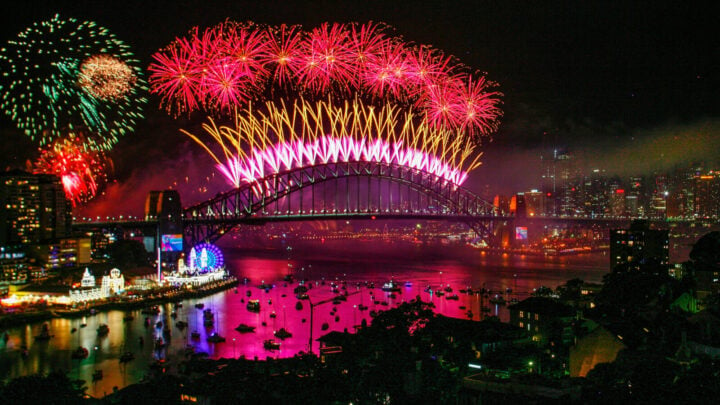 Sydney's iconic fireworks display is in doubt this year due to Covid-19. Source: Getty.

Taking a step away from Covid-19 for a second, there’s another debate ruffling some feathers in New South Wales – whether or not Sydney’s iconic New Year’s Eve fireworks display should be allowed to go ahead, or whether it should be cancelled altogether.

Premier Gladys Berejiklian told 2GB‘s Ben Fordham that she’s keen for the display to go ahead, but stressed it would look very different to previous years. “We are working through those issues,” she said this morning.

“It won’t be the same as every year, most of us will be watching it from home. But we are keen to demonstrate this will be a year of hope, and what better way to do that than with fireworks over Sydney.”

Moving to the south east of the country, parts of Australia are set to experience the coldest spring day in more than two decades over the coming days. The Bureau of Meteorology warned that a “polar plunge” was on the way for SE Australia, with temperatures set to plummet by as much as 10 degrees below average, with snow in elevated areas.

Melburnians have also been told to expect to get wet on Friday, with local hail, isolated thunderstorms and heavy rainfall forecast. Temperatures will also reach a maximum of 12 degrees, which the Daily Mail reports would be the chilliest spring day in Melbourne in 20 years.

And some sad news out of Victoria, as a missing autistic teenager was found dead on Wednesday. William Wall, 14, went missing on Tuesday morning after setting off for his daily jog at around 6.45am, sparking a huge search and rescue effort. The Herald Sun reports that Wall’s body was located on Wednesday, just over 1km from his home, in bushland off residential Victoria Street in Yarra Junction. Wall’s death is not being treated as suspicious.

Finally, taking a glimpse at the latest Covid numbers from across the country. Victoria recorded 12 new cases on Thursday, along with two further deaths. Meanwhile Queensland recorded zero new cases, with speculation that the state will ease restrictions later today. NSW has not yet announced its daily case data, however on Wednesday there were just six new cases, all of whom were returned travellers.