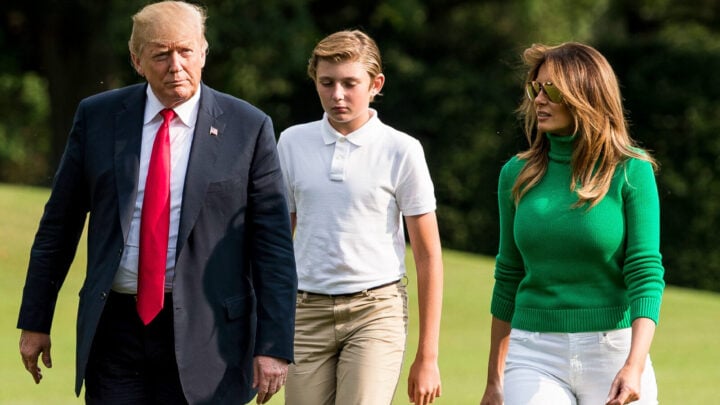 The 14-year-old, pictured here with his parents, showed no symptoms. Source: Getty.

There was some good news for Melburnians today, as they keep their fingers crossed for an easing of restrictions this weekend, as the city’s 14-day rolling average dropped to 8.9. It comes as Victoria recorded six new cases of Covid-19 on Thursday and no further deaths.

Premier Daniel Andrews has tempered expectations this week in the lead-up to his announcement on Sunday, as currently the benchmark for Melbourne to move into the next phase of Andrews’ roadmap to recovery is a 14-day average of less than five, as well as five or fewer cases from an unknown source. Speaking yesterday, he suggested he would not open up as planned, as the state’s coronavirus cases numbers are still too high.

However the premier was targeted by disgruntled constituents overnight as his electoral office in Noble Park, in the city’s south, was vandalised. Police are now investigating after rocks were thrown at the windows, which did not smash, and the words ‘Sack Dan’ were spray-painted on the windows.

In international news, Japan’s Olympic team has been rocked by a sex scandal after four-time world champion swimmer Daiya Seto admitted to having an affair. Following the admission, Seto has been axed as Japan’s captain for the Tokyo Olympics with the Japan Swimming Federation describing his actions as being against their “sportsmanlike conduct standards”.

He has also been banned him for a year. However, according to News.com.au the suspension has been backdated, meaning he will be eligible for next year’s Olympics. He is married to fellow swimmer Yuka Mabuchi, with whom he shares two daughters.

And in America, while her husband is dominating the headlines in the lead-up to the US presidential election next month, First Lady Melania Trump has made an unusual move as she penned a first-person statement about her recent experience with Covid-19. The 50-year-old former model revealed her son Barron Trump had also tested positive to the virus, which has so far killed more than 200,000 people in the United States.

Melania wrote that upon receiving her own positive test results, her mind immediately went to her 14-year-old son. “To our great relief he tested negative, but again, as so many parents have thought over the past several months, I couldn’t help but think ‘what about tomorrow or the next day?’,” she wrote. “My fear came true when he was tested again and it came up positive. Luckily he is a strong teenager and exhibited no symptoms.

“In one way I was glad the three of us went through this at the same time so we could take care of one another and spend time together. He has since tested negative.”

The deeply personal statement comes ahead of President Trump’s town hall event in Miami, Florida, which is due to take place at 8pm tonight (US eastern time). Democratic hopeful Joe Biden will also take part in a similar event in Philadelphia at the same time.