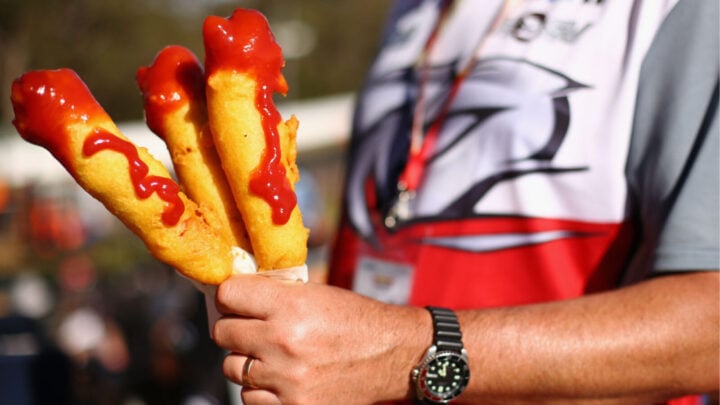 Queensland's Ekka may have been cancelled, but that isn't stopping people getting their hands on Dagwood dogs. Source: Getty.

Victoria released its daily case data on Friday morning and confirmed that the state, which is currently under strict lockdown measures, recorded 372 new cases of Covid-19 as well as 14 further deaths. This is an increase on Thursday’s numbers, which saw 278 new cases and eight deaths.

Meanwhile in Queensland, the SMH reports that Linfox heir Peter Fox has moved his family from Victoria to the Gold Coast after being granted an exemption, despite the borders being closed to travellers from the southern state. The publication claims that the son of billionaire Lindsay Fox was granted an exemption by the Queensland government after persuading them that he drives trucks. He has since been cleared of any wrongdoing by police and has taken up residence in Palm Beach.

And, as royal shows across the country are cancelled due to the ongoing Covid-19 pandemic, it seems there could still be a way for Aussie families to enjoy their favourite parts of the country show.

In Brisbane, which is enjoying the Ekka public holiday today, Queenslanders have reportedly flocked to a pop-up drive-through in their thousands to get their hands on show favourites such as Dagwood dogs and strawberry sundaes, reports the ABC. Brendan Christou, from Queensland’s Royal Agricultural Association, told the ABC: “Food’s a big part of the show but we’re doing it in a socially distanced way.”