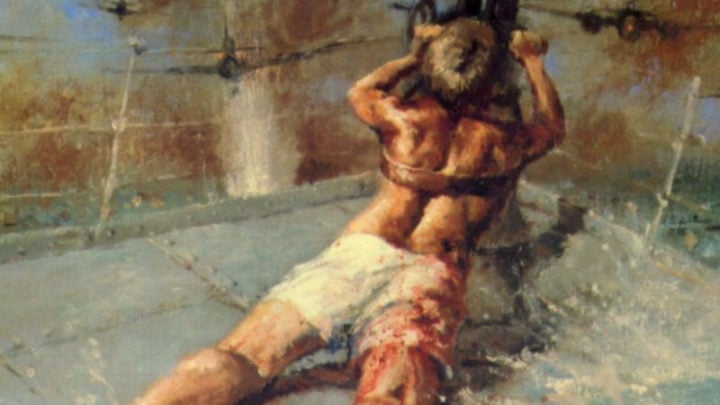 This painting of Teddy Sheean's heroic actions is displayed at the Australian War Memorial. Source: Change.org.

Melbourne hospitals are refusing elderly people treatment for Covid-19, instead sending them back to their aged care facilities, The Australian reports in an exclusive story, citing cases at two residential facilities. However Victorian Premier Daniel Andrews has previously said he had no information that indicated that aged care residents were being refused treatment, saying instead that he understood some facilities no longer wanted some residents under their care because that was “easier”.

This comes as Victoria released its daily case numbers for the past 24 hours, with 278 new cases recorded and a further eight deaths. Epidemiologists believe we’re beginning to see a downturn in numbers as a result of tough lockdown measures, with Deakin University’s Catherine Bennett telling the Today show that it appears the state is “past the peak”.

Meanwhile, as the country continues to tackle the pandemic, state and territory leaders have been warned they will have to dip into their own coffers to support the struggling tourism industry if they choose to keep their borders closed longer than necessary. Tourism Minister Simon Birmingham told the SMH borders should not stay shut “one more day than they need to”.

And some good news as, almost eight decades after his death during the Second World War, it has been confirmed that Ordinary Seaman Edward ‘Teddy’ Sheean will be posthumously awarded the Victoria Cross, reports the ABC. Sheean was just 18 years old when he died after the HMAS Armidale was sunk by Japanese bombers in the Timor Sea in 1942. The young serviceman is credited with helping save the lives of 49 crew members after he strapped himself to an anti-aircraft gun and remained on the sinking ship, resulting in his own untimely death.