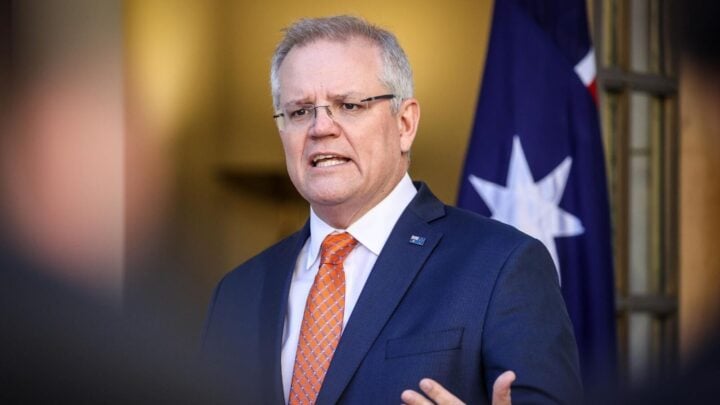 The Morrison Government is pushing to regulate all current and future foreign agreements made with states and territories. Source: Getty.

Today in the news, Victoria’s daily coronavirus numbers appear to be stabilising with the state recording 113 new cases marking its lowest day since entering Stage 4 restrictions. Unfortunately, the state also confirmed an additional 23 lives had been lost which is the third deadliest day in the state since the pandemic started. Herald Sun reported this morning that Daniel Andrews has backed down from his plans to extend the state of emergency provisions for a year. Crossbench sources confirmed Health Minister Jenny Mikakos made an offer late last night to reduce the time period to just six months with the government to produce health advice each time it renewed its state of emergency powers every four weeks.

Meanwhile Queensland has recorded two new Covid-19 cases overnight which is an optimistic outcome considering there were almost 20,000 tests completed across the state in the past 24 hours. The numbers come after all correctional facilities in Queensland were put into full lockdown last night after a corrective services officer at the training academy tested positive for Covid-19. The lockdown was enforced until this morning and saw all prisoners remaining in their cells with everyone on site wearing a mask, according to ABC.

In other news, The Australian has reported that the federal government could be scrapping Victoria’s controversial ‘Belt and Road’ deal – which commits Victoria to working with Beijing on infrastructure projects that benefit both parties – in a push to regulate all agreements that state and territory governments, local councils and public universities make with foreign nations. The proposed law known as the Foreign Relations bill would mean the Foreign Minister would have the power to terminate existing agreements and veto any future agreements that are inconsistent with foreign policy. Prime Minister Scott Morrison said Australia’s policies and relationships should always serve the country’s interests adding that it’s important the Commonwealth dictate national foreign policy.

In sports news, Tim Tszyu has beaten Jeff Horn in a technical knockout in the super welterweight contest that took place in Townsville last night that marked the nation’s biggest fight of the year so far, according to 9News. The decision was made when 32-year-old Horn refused to come out for the ninth round after being beaten by 25-year-old Tszyu, who is also the son of former world champion Kostya Tszyu. There are now calls for Horn’s retirement after the loss marked his third defeat in his last five fights.

And in international news, the tropical island of Mauritius is currently suffering a major ecological disaster after a Japanese ship ran aground causing a mass oil spill in the ocean, reports 7news. Now government officials have reported seventeen dead dolphins have washed up on the shores of the island one month after the oil spill. The dolphins are being taken to the Albion Fisheries Research Centre for an autopsy but were said to be were experiencing several wounds and blood around their jaws but no traces of oil were found. Around ten dolphins survived with officials saying they were very fatigued and could barely swim.