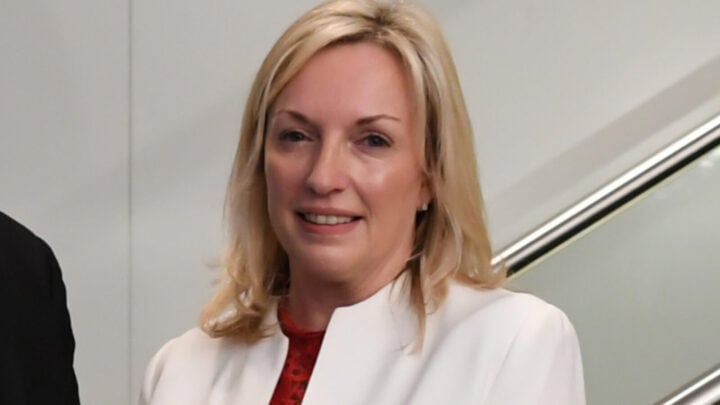 Holgate was grilled during a senate estimates hearing on Thursday. Source: Getty.

Yesterday’s headlines were dominated by the news that Australia Post CEO Christine Holgate had been asked to stand aside after the federal government ordered an investigation into the purchase of four luxury Cartier watches, worth $3,000 each, as a reward for senior executives. Holgate confirmed during a senate estimates hearing on Thursday that the watches were purchased in October 2018 for four senior executives who needed to be rewarded for the “inordinate amount of work” they did in settling a deal with three of the big four banks and other financial institutions to set up personal banking within post office branches.

When asked by Victorian Labor Senator Kimberely Kitching if it was appropriate to use taxpayer’s money to reward “already highly remunerated Australia Post executives”, Holgate said: “I have not used taxpayer’s money, we [Australia Post] are a commercial organisation”. However, during question time on Thursday afternoon, Communications Minister Paul Fletcher said he was “shocked and concerned” by the revelations and called for an investigation into the matter while asking Holgate to stand aside during the course of the investigation.

Now though, The Australian is reporting that Holgate will continue to be paid her salary whilst stood down, netting her an impressive $110,000 whilst the month-long investigation is carried out. Holgate is paid a base salary of $1.4 million, which works out to around $27,000-a-week.

Taking a look at the latest Covid-19 figures, Victoria has recorded just one new case of Covid-19 in the past 24 hours, along with no further deaths, with metropolitan Melbourne’s 14-day rolling average dropping to 5.5. The good news comes ahead of today’s National Cabinet meeting, with the ABC reporting that Prime Minister Scott Morrison will use the meeting to push states and territories into lifting the cap on international arrivals in time for Christmas.

In international news, Prince Harry and Meghan, Duchess of Sussex have finally launched their new website ‘Archewell’ – with the name giving a sweet nod to their on-year-old baby boy Archie Harrison Mountbatten-Windsor. The new website, which was announced earlier this year following their decision to step down as senior members of the royal family, went live on Tuesday.

“Before SussexRoyal, came the idea of ‘Arche’ – the Greek word meaning ‘source of action’,” the Sussexes said in a statement at the time. “We connected to this concept for the charitable organisation we hoped to build one day, and it became the inspiration for our son’s name. To do something of meaning, to do something that matters.

“Archewell is a name that combines an ancient word for strength and action, and another that evokes the deep resources we each must draw upon. We look forward to launching Archewell when the time is right.”

And staying in the United States, the world is eagerly awaiting the second – and final – debate between President Donald Trump and democratic candidate Joe Biden, which is set to take place at 9pm ET on October 25. It will air on television in Australia, with the broadcast kicking off at 12pm AEDT (11am AEST).

Following the last debate, which many complained was incoherent due to both candidates speaking over each other, each candidate’s microphone will be muted while his opponent gives their two-minute answer to an initial question on each debate topic. The microphones will then be switched back on for open debate.