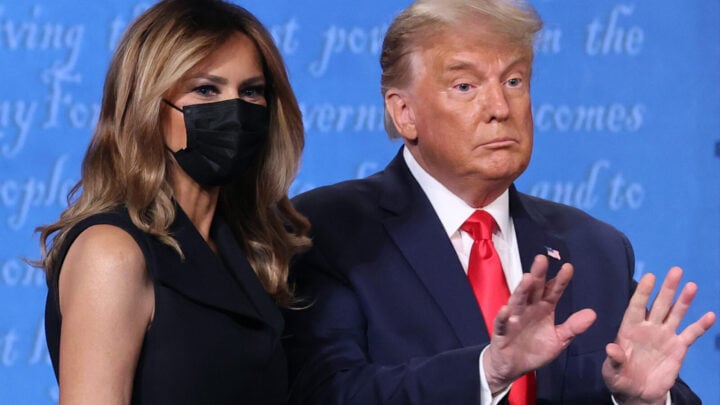 Rumours that the Presidential Couple have employed a stand-in for the First Lady have resurfaced. Source: Getty.

There was some breaking news this morning as ASIC’s Deputy Chair Dan Crennan QC quit over an expenses scandal. Crennan tendered his resignation from the Australian Securities and Investment Commission to Treasurer Josh Frydenberg on Monday morning after an audit brought into question a sum of $70,000 he was given in expenses in early 2019, when he relocated from Melbourne to Sydney.

“I had been intending to retire from my position in July 2021,” Crennan said in a statement, seen by the ABC. “However, in the current circumstances, I have decided that it is in the best interests of ASIC for me to resign now. I have therefore tendered my resignation to the treasurer with immediate effect.”

The audit also highlighted irregularities in payments made to Chair James Shipton, after the corporate watchdog paid $118,000 for him to receive personal tax advice. Over the weekend, Shipton agreed to step aside, pending an investigation into the issue. He also agreed to pay back to money, which he received after relocating to Australia from the US

Meanwhile, Victorians are feeling cheated this morning as Premier Daniel Andrews is still holding out on announcing an easing of restrictions, despite the fact that the state has recorded no new cases and no further deaths over the past 24 hours.

On Sunday, Andrews confirmed he would not be relaxing any of the current restrictions across the metropolitan area, despite the city’s 14-day rolling average falling below 5, as at least 1,000 tests linked to an outbreak in the city’s northern suburbs were waiting to be processed.

Victorian Premier Daniel Andrews delivered the disappointing update on Sunday morning as he assured people that this is not a setback, describing his decision as a “cautious pause”.

“We had hoped today to be able to announce that metropolitan Melbourne would take significant steps,” Andrews said yesterday. “We are not in a position to do that today because we have at least 1000 test results from that northern metropolitan outbreak that are in the labs.”

Andrews went on to say that the tests would likely be returned by Monday and that he hoped to be able to make an announcement in a “couple of days”.

And in lighter news, rumours that the United States have been wheeling out a “fake” First Lady have resurfaced, just weeks out from the US Presidential election on November 3. The rumours spread online after a recent photograph left many convinced that a body double was actually standing in for Melania Trump. The snap in question, taken on October 22, shows Melania and Donald boarding Marine One on the South Lawn of the White House in Washington.

Today's photo of a fake Melania. They think we won't notice this? pic.twitter.com/3xP7MbGy8b

Melania can be seen smiling, wearing large dark glasses and a tailored black dress. However it was the smile on Melania’s face that left people struggling to believe it was the First Lady, with people pointing out that she does not often smile so widely. “Two completely different women,” one person wrote on Twitter. Another said: “I KNEW there was a fake Melania! This is the best photo I’ve seen of her.”

However not everyone was convinced, as one person commented: “I don’t see all that big a difference here. Certainly not enough to warrant thinking it’s an entirely different person.”