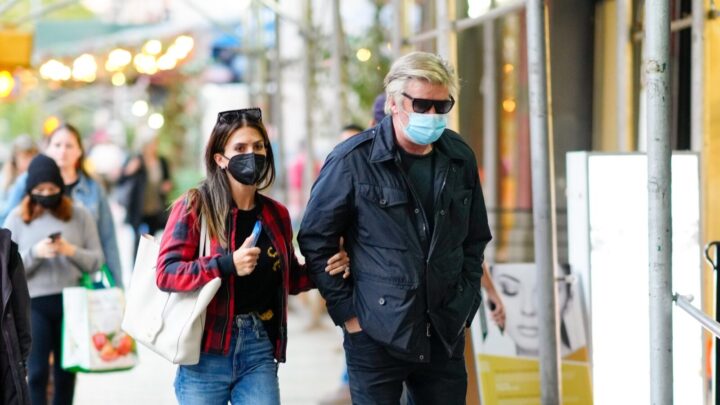 Hilaria Baldwin vowed to speak her truth and and opened up about her husband suffering from PTSD. Source: Getty.

In her latest Instagram Story video, Hilaria Baldwin, 37, claimed her husband, Alec Baldwin, is currently suffering from PTSD – and had been “for a long time”.

In the bold video, posted on December 9, Hilaria ranted about being a celebrity and “living in the famous world” in the aftermath of the tragic Rust shooting which claimed the life of cinematographer Halyna Hutchins.

“It’s [PTSD] something that is not just from what happened recently but he’s been suffering from this for a very, very, very long time…,” said Hilaria.

She also complained about wanting her “voice to be heard”, and flagged that she would be “speaking her truth” in 2022.

Hilaria’s social media pushback comes shortly after her husband, Alec Baldwin, 63, shared an open letter co-signed by 25 Rust cast and crew members on his Instagram. The letter from the father of seven defends the movie’s production after claims of poor working conditions and employee mistreatment prior to the horrific on-set shooting accident emerged.

The open letter begins by saying the writers of the letter were in no way influenced to make these statements by any of the producers on set, including Alec himself.

It adds that the crewmembers “believe the public narrative surrounding our workplace tragedy is inadequate and wish to express a more adequate account of our experience”.

The letter continues to say that in the film industry, it is common to work on productions that are “unprofessional and “hectic”, explaining that those conditions give “experience and credits,” adding that many of those signing the letter had worked on such conditions.

However, “Rust was not one of them,” they wrote. “Rust was professional. We do acknowledge that no set is perfect, and like any production, Rust had its areas of brilliant and its areas that were more challenging.”

The signing crew members also wrote that they “strongly support the fight for better working conditions” across the industry, but assert that the set of Rust is not an example of the circumstances they are “fighting against”.

“The descriptions of Rust as a chaotic, dangerous and exploitative workplace are false and distract from what matters the most: the memory of Halyna Hutchins, and the need to find modern alternatives to outdated industry firearm and safety practices,” they wrote.

The crew workers also acknowledged that a “few” members did quit prior to the tragedy, but a “vast majority” remained, “never feeling the need to protest or quit.”

The employees stated that morale was “high” and “laughter and optimism” were prevalent, writing that “from the director down to the production assistants, all departments worked well together, collaborating and helping each other achieve shared artistic goals.”

The letter concludes by requesting that the general public “not let the view of a few disgruntled employees” affect their views on the “rest” of them. The signing cast and crew also “kindly request” that any “speculation” and “generalisation” made by the public be “sympathetic” until the investigation concludes.

The letter was shared weeks after Alec’s tell-all interview with ABC journalist George Stephanopoulos. During his clearly emotional interview, Alec insisted he did not feel any guilt, explaining that he bore no responsibility for her death.

When asked if the shooting was the worst thing that ever happened to him, Alec replied with “Yes. Yes, yes.”

Just two days following the interview, both he and his wife deleted their Twitter accounts.

Do you think Hilaria Baldwin should be keeping a lower profile at the moment?