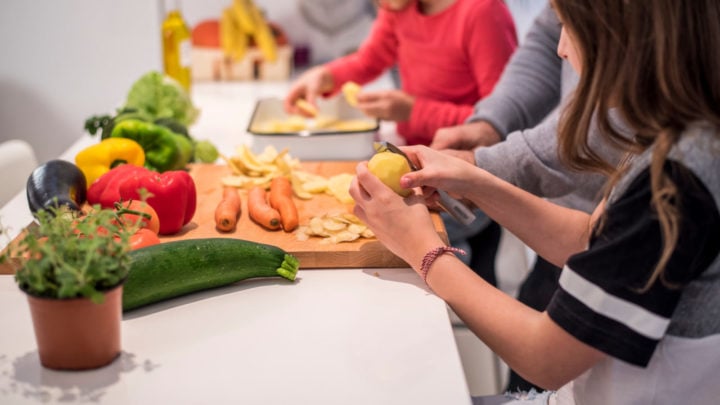 A concerned mother slammed her mother-in-law for allowing her four-year-old daughter to peel potatoes, claiming it was too dangerous. Source: Getty

Helping out your mum or dad in the kitchen was probably the norm growing up, but for one concerned mother doing simple tasks to assist with dinner is too dangerous for her young daughter.

While some would consider a great skill to learn early on, the concerned mum slammed her mother-in-law for allowing her four-year-old to use the peeler to help prepare the potatoes. Taking to online forum Mumsnet recently, the woman admitted her shock at learning her daughter had undertaken the job alone, while her mother-in-law completed other jobs around the house.

She even went as far to claim that her MIL was just palming off the jobs she didn’t want to do herself to the little girl.

“My DD [dear daughter] is four, just collected her from MIL house where she slept last night,” the mother explained. “She wasn’t home and was at SIL [sister-in-law] house which is next door. Went inside, they say she hasn’t had dinner yet, we’re just cooking it, egg and chips.

“Then SIL start [sic] telling me my daughter peeled the potatoes all by herself with a potato peeler. I say to my daughter are they just having you here to do the jobs they don’t want to do?”

The mother continued by explaining that her MIL said it wasn’t the first time the little girl had used the peeler, claiming last time she helped with the carrots and parsnips as well and really enjoyed it. But while the grandmother was adamant her granddaughter was perfectly capable, the mother expressed concern that it was too dangerous for someone so young.

“AIBU [am I being unreasonable] to be narked that my daughter is four and a potato peeler is dangerous, especially unattended, or am I being silly and it’s just her growing up? she questioned. “I don’t know what to think but I wouldn’t personally leave somebody’s child, or my own, unattended peeling vegetables.”

The post received plenty of replies, with most claiming kids love helping out in the kitchen and peeling is a great task to start with.

“I think it’s fine,” one person commented. “My kids used the peeler at that age and I wasn’t always in the room. Kids often love to help in the kitchen, especially when they have proper responsibility. Makes them want to rise to the challenge.”

While another added: “My four-year-old tries this, pretty useless so far at it but keep encouraging. Four-year-olds should be doing jobs about the house. Mine loads and unloads washing, dusts, makes bed, helps unload the dishwasher, can do washing up but does get the place a bit wet and helps with cooking so some chopping, loading things in to pots, gets stuff out of the cupboard using a chair to reach, stirs, makes the table.”

However, others were a little more understanding in their responses, claiming it’s normal for parents to be worried when kids start doing new tasks, but it’s all a part of growing up.

“I think we always worry about our children but the only way for them to learn is for them to try it,” someone added. “Your worry is understandable but they do love to help and as others have said your four-year-old has now learnt a new skill.”

Do your grandkids help out in the kitchen? Do you think using a potato peeler is a reasonable job for children?